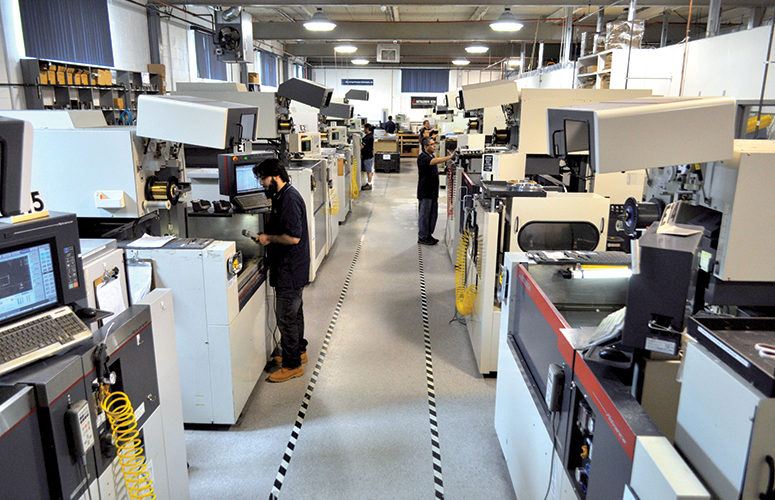 Many successful high-tech companies can trace their roots back to institutions of higher education, where student entrepreneurial dreams – as well as those of professors – are cultivated in “can do” climates.

On the following pages, we delve into the experiences of three entrepreneurs who have done well by taking the incubator route.

The VentureLink incubator at the New Jersey Institute of Technology (NJIT), Newark, allowed Bob Tarantino to establish New Jersey Precision Technologies, Inc. more than 30 years ago. He was one of the first entrepreneurs to establish or locate a startup at the then newly opened site, which today offers 110,000 square feet of space in two buildings.

Tarantino was a mechanical engineering technology major at NJIT who had a passion for high-tech manufacturing and automated software. He combined his strong interests in computer programming and mechanical engineering to develop a software application that automated the manufacturing process. “The software I developed … enables CNC (computer numeric control) and wire EDM (electrical discharge machines) manufacturing with no programming intervention. At the time, it was quite unique, very efficient and is the foundation of what is still used today,” Tarantino says.

It was an NJIT professor who told him about VentureLink (then called the Enterprise Development Center), saying Tarantino would be able to start his own business at the facility while attending school and working full-time at his day job as a computer programmer.

“That’s what did it for me,” Tarantino says of the professor’s advice. He recalls, “the incubator had a receptionist, a loading dock, a receiving department, it gave us space for machinery, use of NJIT lab equipment, and the opportunity to hire students and interns from NJIT’s engineering program. … It enabled me to have what appeared to be a full-time business.”

Being on the NJIT campus also gave Tarantino access to “wicked smart people,” and many of the students whom he hired 30 years ago still work for the company today. He also keeps in contact with former VentureLink incubator-company cohorts, many of which are New Jersey Precision Technology clients.

Presently located at VentureLink is data privacy firm Duality Technologies, whose SecurePlus technology platform enables the privacy-protected analysis of encrypted data without exposing the data itself. Data collaborations between different parties are possible while complying with privacy regulations and delivering IP protection.

Duality, which also has an office in Tel Aviv, Israel, was founded by a number of partners, including Dr. Kurt Rohloff who serves as its chief technology officer and is also an associate professor of computer science at NJIT. He spent a majority of his career as a defense contractor in support of DARPA projects in the areas of cryptography, data privacy and homomorphic encryption (allowing data to be analyzed while encrypted).

Rohloff believed that the homomorphic encryption technology “was going to be the next big thing,” but says it would have been difficult establishing a company while working at a defense contractor.

Fortunately, he was recruited into the computer science department at NJIT to grow the externally funded research portfolio from the US Department of Defense. While there, he and his partners – including two MIT professors with whom he collaborated with at DARPA – decided to start Duality.

Today, the company occupies 1,000 square feet at VentureLink. Rohloff says the incubator provides Duality access to advisors, consultants from various industries, including state government, and student interns (one student has been hired permanently).

He says that NJIT “is woefully underrated in terms of the quality of students and faculty compared to other major technical institutions. As far as I am concerned, that means we can recruit more high-quality people with less competition.”

Of operating a business in the Garden State, Rohloff says, “We have always been a multinational company with a large footprint in New Jersey. Being at NJIT and in Newark gives us easy access to: Manhattan, especially Wall Street, and Washington DC via public transportation; international destinations via Newark Liberty International Airport; and the state’s life sciences industry.

Regulated industries, such as healthcare and finance, are among the top industry sectors served by Duality. The company has raised $19 million in Series A funding rounds between 2018 and 2019. “We plan to grow and have hired people since the COVID-19 pandemic lockdown,” Rohloff says, “but we don’t necessarily have a reason to move out of VentureLink right now.”

On the life sciences side of innovation, Sentrimed is making significant inroads in the fight against cancer at the South Jersey Technology Park @ Rowan University (SJTP). The company was founded by Gary Goldberg, an associate professor of molecular biology at Rowan’s School of Osteopathic Medicine (SOM), whose research on the way normal cells or groups of normal cells communicate and influence each other – and how that can influence a positive change in rogue cancer cells (all under a process called contact normalization) – led him on a journey from various universities and institutions around the world to, finally, the University of Medicine & Dentistry of New Jersey in Stratford (now Rowan SOM).

Goldberg identified a cell receptor protein called podoplanin (PDPN) with help from colleagues at the National Cancer Center in Tokyo, and developed a drug candidate called “MASL” at Rowan to target it. “By targeting this receptor, we can inhibit cancer growth … even inhibit it before it starts,” he says. “Cancer comes from one single cell. We think we can stop this one single cell from breaking out because we can detect and target this receptor with [our] compound.”

Goldberg arrived at Rowan with funding from the National Institutes of Health (NIH). When the organization wanted him to conduct clinical trials on his drug candidate, he “realized that academic research is not geared for that; so we thought it best to start a company. That is when we formed Sentrimed in 2010.”

Goldberg says Rowan was instrumental with patent applications. The school’s technology transfer office and the attorneys it supplied helped him through the process. He recalls, “The language of a patent is very legalese and few people know how to speak it. So they [attorneys] helped turn these ideas into actual intellectual property.”

Rowan is also helping the company apply for federal SBIR and STTR grants. Goldberg explains that, “In order to apply for those grants, you can’t just be a paper company. You need resources; so we established an office at the SJTP. Rowan supports our infrastructure as a company. Without that, we would be at a huge disadvantage.”

The US Food & Drug Administration has approved a clinical trial for MASL (in a lozenge form). Adds Goldberg, “There is no way I could have done this (conduct the trials) by myself because of the [potential] liabilities. Rowan stepped in and I am grateful for that.”

Providing words of entrepreneurial inspiration, New Jersey Precision Technologies’ Tarantino advises anyone with a good business idea to visit a local business incubator. “Just do it because taking the first step is always the hardest part. However, the flexibility of an incubator is the attractive part of it all. You can start renting a very small space and build up your business until you are ready to make the jump and leave your day job.”