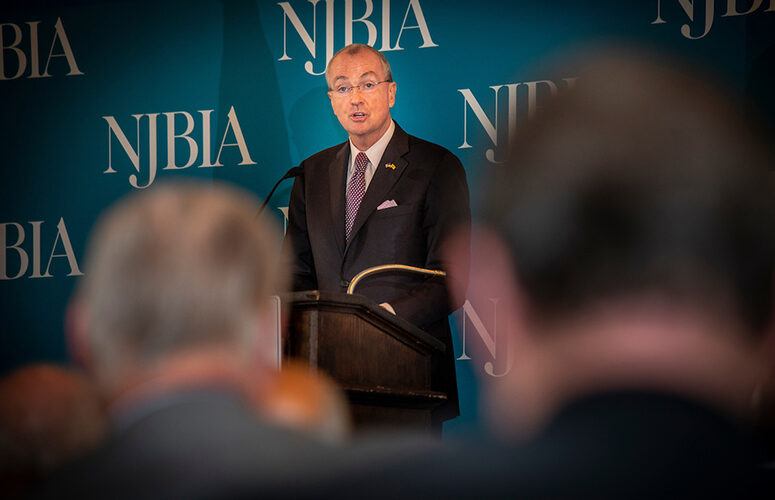 Gov. Phil Murphy Forecasts a Brighter Future for the State

Focusing on “an economy that works for everyone,” Gov. Murphy touches upon his administration’s efforts to help businesses emerge from the COVID-19 pandemic.

Smack in the middle of his four-year term as governor, Phil Murphy was faced with the COVID-19 healthcare crisis that, in New Jersey, has now resulted in just under one million confirmed cases and approximately 27,000 deaths.

He has issued numerous executive orders to help and protect residents, while many of the same orders resulted in significant economic challenges for New Jersey businesses. On the other hand, he and his administration have also rendered aid to small businesses during this time, giving them some $1 billion in economic assistance. Through it all, the governor has maintained his mantra that “public health creates economic health.”

Now, Murphy is seeking a second term in the face of the pandemic. No other state governor has faced such a crisis in more than 100 years. At a New Jersey Business & Industry Association (NJBIA) Employer Legislative Committee reception held this past summer, Murphy addressed the issue to a room filled with business people. “It would be an understatement to say the last [year and a half] have been difficult. We felt grief and witnessed inequities that the virus laid bare. We all witnessed the trials that our communities, our businesses, neighbors and families faced. And, we lost more than 26,000 blessed members of our New Jersey family,” Murphy said.

Despite these hardships, Murphy is optimistic about the state’s future, saying that the recovery starts on Main Street for the state’s small businesses. “Though our partnership with the Legislature, we ensured that the federal relief we received went right to the small businesses that needed it the most,” Murphy said.

The New Jersey Economic Development Authority, for example, gave tens of thousands of small businesses “life-saving loans, grants and other types of capital during the pandemic,” Murphy said, adding, “We also know that more is needed to ensure that our Main Streets remain healthy and viable as we look to emerge from the pandemic.”

He said the incentives presented in the New Jersey Economic Recovery Act (NJERA) of 2020, which was signed earlier this year, reflect the principles of fairness. “The policies we have implemented are building on the framework of a stronger and fairer economy that works both for our residents and for our businesses.” Murphy told the audience.

Among the NJERA programs Murphy discussed was the NJ Innovation Evergreen Fund. “This will pair state resources with private venture capital investments into a diverse array of New Jersey-based start-ups. It will be a game changer in our efforts to make the state a global center for innovative new businesses working at the leading edge of the future economy. … New Jersey has the talent, the location and the great ideas, but we have been missing the capital, particularly the venture capital,” he said.

The governor commented on the NJERA’s Historic Property Reinvestment Program, which is a $50-million competitive tax credit program – to leverage the similar federal historic program – to support transformative rehabilitation projects of identified historic properties. “As seen in other states, we know that repurposed historic buildings create new homes for businesses, while strengthening a community’s core and honoring [a town’s] past,” the governor said.

Adding that new businesses will be connected and supported by a more reliable transportation and energy infrastructure, Murphy said the state is embarking on the largest infrastructure investment program in state history. “Working in partnership with the Biden administration, we are reimagining our entire transportation network, from the new North Portal Bridge, which was green lighted, all the way to the Gateway program with two new tunnels under the Hudson River,” the governor said.

He said the state’s future will be powered by bold ideas and a shared commitment to moving forward by rapidly expanding the clean energy economy. “This is a once-in-a-generation opportunity,” he said. “We are cementing our position as the nation’s leader in offshore wind with the launching of the New Jersey Wind Port, which will make our state a hub of not just installing offshore wind technologies, but the manufacturing and logistics that go along with the industry.”

In addition to business assistance, Murphy pointed to the fact that the state was able to give nearly $320 million in direct tax rebates to more than 760,000 working and middle-class families in the state. “In addition to that, we are expanding the child and dependent care tax credit, and the earned income tax credit,” he said.

Murphy commented that after the last economic downturn (the Great Recession), “the shortsighted and failed ways of doing things led New Jersey to one of the slowest recoveries of any state in America. I share with every person in this room a vision for a very different end-result this time from the pandemic.

“Over the past three and a half years, we have been clear on how and where and why we would invest. We have restored order to our fiscal house and strengthened the underpinnings of our economic foundation. As we emerge from this pandemic, [our] decisions are even more important and impactful.

“New Jersey today, notwithstanding a crushing pandemic and the overwhelming loss of life, jobs and businesses, is a vastly better place for countless families and businesses especially on Main Street. We won’t go back to the old ways of doing things. Creating a stronger, fairer and more resilient economic future for our state has been our driving passion and focus. It requires all of us … it requires partnerships … and I look forward to working with you on the road to recovery.”