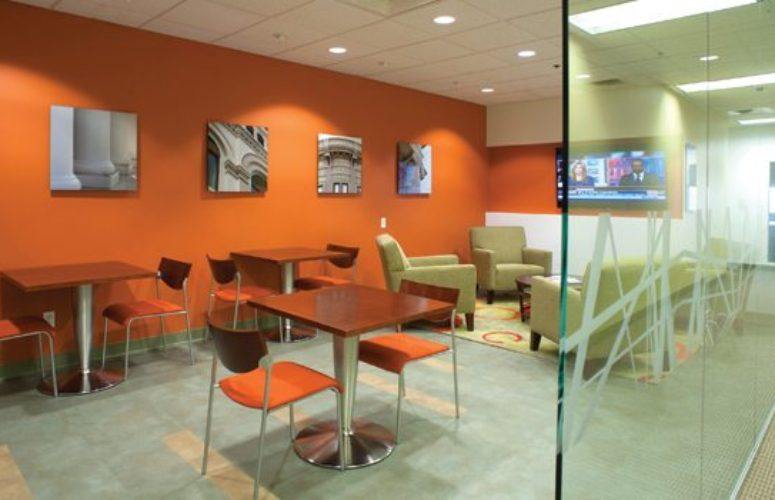 The lounge area at Carr Workplaces in Rutherford, which offers office settings ranging from 95 to 250 square feet, with fixed fee rents starting at $35 a month. (Photo: Carr Workplaces)

Small businesses seeking suitable commercial space in New Jersey don’t have the favorable buyers’ and renters’ market they had for several years following the 2008 market crash. What they do have, however, are commercial properties increasingly configured to meet their own highly diverse office, retail or industrial space needs.

Biggins Lacy Shapiro in Princeton advises companies on what it terms “location economics” – the many factors to be considered by a company seeking the right new location. Jay Biggins, BLS’s executive managing director, notes that these factors include evaluating variables such as prevailing compensation levels in the area, taxes, regulations, et. al.

When it comes to a tech company looking for office space, one big issue these days is finding a location that best appeals to young, highly skilled, high-value workers. “These workers prefer to be in an urban setting,” Biggins says, “with urban amenities. Even during a recession, these people won’t take just any job.”

Regarding the rent-versus-buy decision, he continues, growth companies “are usually well advised to use capital for purposes other than buying real estate. They have so many other demands that are a priority … preserving capital for their core business.” And though sometimes an owner will buy property and lease it back to the company, and this might not be a problem in a closed company, “elsewhere it might lead to conflicts of interest.”

The growing preference of young high-value workers for urban settings also has importance for retailers who place a high value on such customers. Looking for new retail space, these retailers tend “to focus on [urban] foot traffic, not car traffic.”

Meanwhile, energy’s direct costs can be important in selecting the right office space, yet something else has also become important. Businesses are looking for “a higher energy standard,” Biggins says. Employees, too, are pushing this. “It’s become a workplace ethical issue, not just a cost consideration.”

When The Office Need Is Modest

One-person shops, start-ups and smallish companies of many kinds are a growing part of the post-recession economy. These enterprises tend to be very cost conscious and frill-averse when it comes to office space, with only occasional demands for more impressive amenities like conference rooms.

Enterprises such as these often turn to facilities like those operated by Carr Workplaces in Rutherford, which offers 62 office settings ranging from 95 to 250 square feet, with fixed fee rents starting at $35 a month. Such arrangements, says Shawn C. Wilson, Carr’s regional manager, “give back time clients can use on their business, not on office management.”

She adds: “This isn’t prepackaged space. We speak with clients and try to meet their special needs to the greatest extent possible.” They might just want a place to get mail or phone answering service … a place they drop in only a few times a week.”

The New Jersey office space vacancy picture is a mixed one these days, according to Wilson. “Commercial vacancies continue to fall,” she says, “with continued removal of office space in Newark. … But there’s growth on the Hudson waterfront, and Class A space is in demand in Bergen, Morris and Essex counties.”

Residential leases in New Jersey have more protections for renters than do commercial leases. The commercial variety is much more landlord friendly, which is why attorneys sometimes get called upon to help settle disputes.

One such attorney is Robert S. Burney, a shareholder with Lindabury, McCormick, Estabrook & Cooper in Westfield. “Some lawyers like to read insurance policies,” he says. “I like to read leases.

“You don’t want surprises. You want things spelled out so you understand your obligations,” he says. “It’s not unheard of but rare that a [commercial] lease is a gross lease, that you only pay base rent and nothing else.”

What might be added to the base rent, includes: a portion of real estate taxes; snow plowing and landscaping costs; electrical costs (are they shared by the entire building or only metered in your part?); and common area maintenance, generally.

“It doesn’t happen often,” Burney continues, “but what if there’s a fire? “In such a case, a lease could obligate a tenant to pay rent anyway while a landlord makes a good faith effort to find a replacement tenant. If a tenant defaults on a lease, a landlord might go after other tenant assets.

With care and counsel from an attorney or broker, most lease problems can be resolved. Citing a tenant upside when commenting on commercial leases, Burney concludes, “While the [commercial real estate] market is getting stronger, there are still a lot of opportunities to negotiate.”