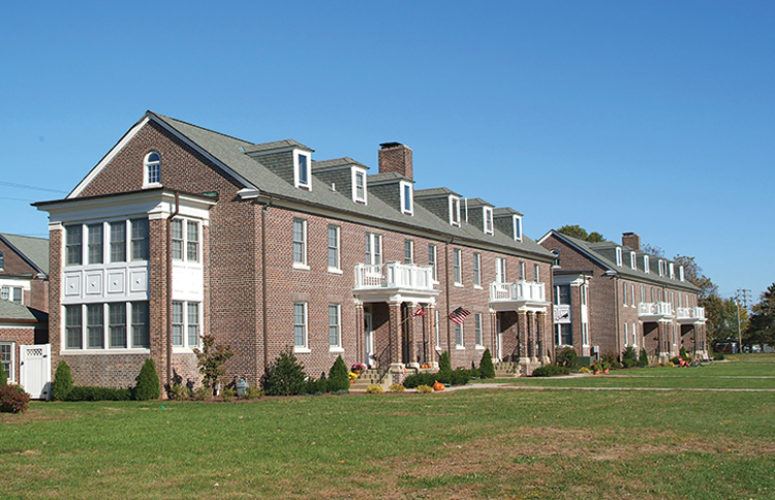 Spanning a vast 1,200 acres, Fort Monmouth is succeeding with its revitalization plan to attract high-tech companies as well as retail businesses and residents.

Commvault, Aaski and Tetherview, which all work within the telecom and tele-defense arena, are operating at the site, and a total of 1,400 jobs have been created at the Fort, which during its operational heyday as the Communications-Electronics Command (CECOM) for the U.S. Army, employed some 7,000 civilians. If all goes well, 10,000 jobs will be created at the Fort within a number of years, says David E. Nuse, deputy executive director of the Fort Monmouth Economic Revitalization Authority (FMERA).

The Fort closed its doors as a U.S. Army installation in September 2011 after the Base Realignment and Closure Commission (BRAC), in 2005, ordered the facility’s closing and the relocation of CECOM to Maryland. Under base closure legislation, a local development authority had to be created to market and develop the site. This gave birth to FMERA in 2010, which is an independent state authority staffed by New Jersey Economic Development Authority personnel. As its guideline, the authority is working with a master plan created by the now defunct Fort Monmouth Economic Revitalization Planning Authority.

The Fort had approximately 5 million square feet of building space. There are some 325 buildings (not including residential spaces) on the site, 75 percent of which have been or will be demolished. According to FMERA, 1.16 million square feet of space will be reactivated by year end. Additionally, $29 million in property transactions have occurred at press-time, with another $79 million in negotiations.

Nuse calls the region that Fort Monmouth is located in as “Silicon Shore,” with small “high-tech business nodes” developing along the Garden State Parkway. He mentions Somerset Development’s Bell Works facility in Holmdel and towns such as Red Bank and Asbury Park as examples of such nodes. “We have all the features that tech workers rate highly in terms of transportation and quality of life,” Nuse adds.

He comments that the area has a dense concentration of highly educated professionals. “A lot of those people commute out of the area to work or to find work. What we are looking to do is tap that talent pool,” he says.

Sara Giberson, senior marketing and development officer at FMERA, says that the Fort has an advantage over the Bell Works project because it has rail access.

The site is within walking distance to the Little Silver train station, part of NJ Transit’s North Jersey Coast line that stops in Newark and New York Penn Stations and Newark Liberty International Airport. The station sits at the tip of the property along its eastern edge. There have been discussions with NJ Transit to implement a bus route at the Fort as activity increases, and the master plan entails the creation of bike and walking trails on the eastern and western sides of the complex. The eastern side would include a walkway alongside the Ocean Port Creek. A jitney service throughout the Fort is tentatively planned.

Nuse says Fort Monmouth is trying to attract millennial tech workers via a variety of amenities. This includes opening a microbrewery, coffee house and event space in what was once a former dance hall; turning an existing bowling center into a Lucky Strike sports entertainment complex (or something similar to it); turning an existing Expo Hall into a 1,000-seat community theater; and turning six existing buildings into artist lofts, among other initiatives … this is all in addition to an existing marina and the Suneagles Golf Club, which opened on the property in 1926.

Overall, there will be lifestyle town centers throughout the site, offering a mixed use of retail, housing and entertainment establishments. Giberson stresses that since Fort Monmouth spans three communities – Tinton Falls, Eatontown and Oceanport – the developments within the Fort will be strategic and complement (and not compete with) these towns.

There are approximately 1,585 residential units at Fort Monmouth. This includes RPM Development’s East Gate at Oceanport, in the Fort’s historic district, which consists of 68 fully restored homes.

Both Nuse and Giberson explain that the creation of the amenities, along with housing, are the preferred first steps to take in order to attract businesses to the complex. “We want to establish a sense of place and activity, so we are leading with residential development. … Then we are trying to populate the Fort with restaurants, the arts, etc., to try to set the table for bringing in office and tech space,” Nuse says.

Giberson is bullish on the ongoing developments, saying, “The plan has always been for 2019 to be our busiest year. Over this summer and into next year, you are going to see a lot of shovels in the ground and changes being made. That will be a turning point for us.”