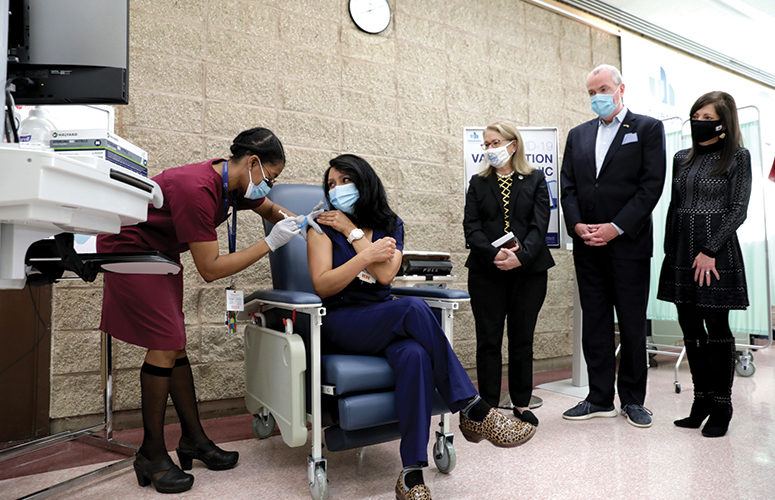 The most complex healthcare initiative in our nation’s history – the rapid development and distribution of the COVID-19 vaccine – continues to unfold across the nation.

According to health experts, more than 100 million healthcare workers, nursing home residents and other Americans are expected to be vaccinated by the end of March, giving a weary nation hope for at least a gradual return to normalcy.

New Jersey’s life science industry has been in the thick of the COVID-19 response, from Peapack-based Pfizer and Raritan-based Janssen Pharmaceutical Companies (of Johnson & Johnson) developing vaccines in record time; to Rutgers University conducting clinical trials for Moderna and Johnson & Johnson with unprecedented numbers of participants; to dozens of New Jersey hospitals storing and administering the vaccines.

“What Silicon Valley is to technology, New Jersey is to life sciences, pharmaceutical and bioscience companies,” says Timothy Lise, PharmD, BCPS, executive director of pharmacy services for Atlantic Health System. “With this pandemic and the rollout of the COVID-19 vaccines came the need for new resources, new testing, new storage units, etc. New Jersey’s highly skilled workforce could point us in the right direction, and when you’re working on a such a massive scale, I think New Jersey’s health systems are well positioned to help lead and provide the example moving forward.”

Shobha Swaminathan, associate professor of medicine, Rutgers New Jersey Medical School, clinical research site leader for Moderna’s Covid-19 vaccine clinical trial, and medical director for the Infectious Disease Practice (IDP), also praised the collaborative spirit, saying, “The success of the trial speaks to what we can really do when we decide to put our minds together – from us in the scientific community, to investigators, to people at the NIH (National Institutes of Health), and the FDA (Food and Drug Administration) working with pharma companies to find answers to this pandemic.”

On December 15, Maritza Beniquez, an ER nurse at University Hospital in Newark, became the first New Jersey resident to receive the COVID-19 vaccine – with Gov. Phil Murphy declaring it a “historic” moment in the state’s ongoing struggle with the coronavirus. According to University Hospital Chief Legal Officer Mary Maples, her facility was the perfect spot for this event, having served as the NJ Department of Health’s regional collaborator for Northern New Jersey; being at the center of New Jersey’s hardest hit county (Essex) for COVID-related deaths; and having the ability to store the vaccine and the knowledge and know-how of what to do with it. “We knew we had to set the stage early, loudly and proudly that these vaccines were safe,” she says.

About 80 other University Hospital healthcare workers also received their first dose of the Pfizer vaccine that day, followed by employees of Hackensack Meridian Health in Hackensack; Robert Wood Johnson in New Brunswick; AtlantiCare Regional in Atlantic City; Morristown Medical Center; and Cooper University Hospital in Camden. Forty-seven more of the state’s 71 hospitals had received doses by the end of that week and were able to vaccinate staff members.

This initial rollout marked the culmination of several months of intense and expedited vaccine development and approval, thanks to the Trump Administration’s Operation Warp Speed and collaboration between the public and private sectors. It came during a particularly intense wave of the virus just as the US surpassed 300,000 COVID-related deaths, including 63,000 over 26 days in December.

“There has been unprecedented collaboration not only between the public and private sectors, but also between the separate health systems within the state,” says Atlantic Health System’s Lise.

Normally, vaccine development takes 10-15 years, so bringing multiple COVID-19 vaccines to market in less than a year has been nothing short of miraculous. Pfizer was first with its two-dose Pfizer-BioNTech COVID-19 vaccine, deemed 95% effective, which received emergency use authorization (EUA) from the FDA on December 11. Less than a week later, Moderna’s mRNA-1273 – also a two-dose vaccine – received EUA, which expanded the reach of COVID-19 vaccines to more than 4,000 sites. Janssen has been close at their heels, with the expectation that its single-dose vaccine will be ready for EUA sometime this month.

How were these pharma companies able to move so quickly? According to Swaminathan, while clinical trials usually involve 3,000 to 5,000 participants, the current COVID vaccine studies had 10 times that sample size, allowing the scientific community to help validate two different vaccines with 94.1% and 95% efficacy. “We were doing the Phase 2 and 3 trials, while at the same time doing follow-up with people who participated in the early trial, which greatly expedited the process,” she says. However, the key was that manufacturing was occurring simultaneously to allow for seamless delivery of safe and effective vaccines after approval.

Rick Nettles, MD, vice president medical affairs, Janssen Infectious Diseases & Vaccines, says his company had already been working on vaccine development for a number of other infectious diseases, including Ebola, HIV and Respiratory Syncytial Virus (RSV). So when China released the genetic sequencing of COVID-19 last January, Janssen had a platform to develop a vaccine quickly against coronavirus. Also, the company was able to start the manufacturing process before the completion of its Ensemble Phase 3 clinical trial involving 45,000 participants.

“We are also studying our vaccine as both a single- and two-dose regimen, recognizing that having a safe and effective single-dose preventive COVID-19 vaccine could bolster public health efforts and reduce complexity in the vaccination process,” he says.

As new strains of the virus emerge, including a United Kingdom varient first reported in the US in December, and one from South Africa that may even be more contagious, questions remain about the efficacy of the current vaccines. Anthony Fauci, MD, director of the National Institute of Allergy and Infectious Diseases, say the vaccines – with possible modifications – should still work against these strains, though other medical experts are questioning whether they will be fully effective.

Mass acceptance of the vaccines will grow “as influencers and community leaders are vaccinated,” says Swaminathan, who points to studies that say the number of Americans likely to get the vaccine has jumped from less than 50% to well over 60% since the rollout started. “As the process expands beyond Tier One, we are seeing more people get vaccinated. The more information they have, the better able they are to make the decision that’s best for them, their community and their family.”

Transparency is also a key to making people feel comfortable with the vaccines, according to Nettles, who says Janssen has released information on the full Ensemble clinical trial protocol online, while also publishing results of previous trials online as well as in peer reviewed journals. He also points out a diverse population was enrolled in the Ensemble trial, including African Americans, Hispanics and older adults, adding, “People will be more confident in a vaccine if they see faces like their own were enrolled in the trials,” he says.

In addition, Swaminathan says Rutgers conducted the clinical trials with the “utmost integrity,” using independent scientific experts to review the data and help determine who met the criteria to participate. “It’s important the public recognizes the science was conducted in a vigorous manner and that this was not a race between vaccine companies, but a race against COVID-19,” she says

Experts have said for the US to get “herd immunity” and stop the spread of the virus, between 75% and 80% of the population needs to be immunized – a goal they hope to reach sometime between May and June. (Dr. Fauci recently raised that top number to 85%, and said it may take until July).

“We were fortunate to be a site for the Moderna vaccine trial, being able to have first-hand experience with the positive safety and efficacy of the vaccine,” Balani says. “Given that Hackensack Meridian Health is a very large establishment – having the freezers, the pharmacy staff to address the timely management of large doses, and the ability with so many volunteering vaccinators – we will be able to offer the services to a large catchment area.”

However, the vaccination rollout got off to a slower start than many had hoped, with 2.8 million vaccines being administered by the end of 2020 – a far cry from the 20 million government officials had promised.

In New Jersey, more than 100,000 healthcare workers and long-term care residents had received a COVID-19 vaccine by early January, according to State Health Commissioner Judith Persichilli, even though the state had received 400,000 vaccines by that time. Moncef Slaoui, chief advisor of Operation Warp Speed, acknowledged these numbers are much lower than the government had hoped for, adding, “We know that it should be better, and we’re working hard to make it better.”

University Hospital had administered about 3,000 vaccines by the end of 2020. According to Chief Medical Officer William Holubek, the hospital has the capability of administering more than 3,000 COVID-19 vaccines a week, but believes there’s still a long way to go to reach that number.

“Getting 9 million New Jerseyans vaccinated is no small feat,” he says. “We hope people will eventually understand the risk of not getting the vaccine, as well as the benefits of getting it, convincing people it’s the best thing for them, their community, and the world.”