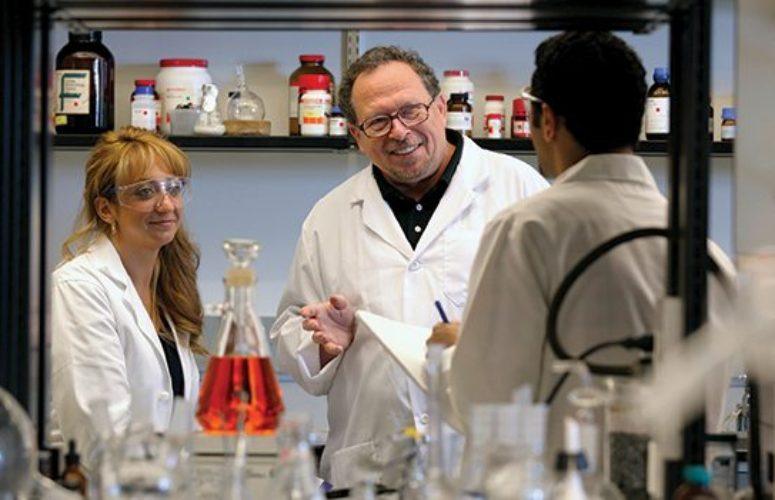 Sergiu M. Gorun, professor, Department of Chemistry and Biochemistry, is the director of the Center for Functional Materials at Seton Hall University. Seton Hall says, “... Professor Gorun has received in excess of $600,000 recently from the Department of Energy, Department of Defense, the National Science Foundation and other granting agencies, and benefited from the contributions of several US and foreign collaborators, including Belgium and Canada.”

While colleges and universities do receive tuition monies, government appropriations, and have endowments, specific federal grants allow faculty members to expand upon their research. As Shreekanth Mandayam, PhD, vice president for research, Rowan University, stresses, “Various government organizations are there to provide grants and contracts to universities, so that our faculty can invent, experiment, discover and create new knowledge that can be useful to the taxpayers who are funding this activity.” Underscoring the fact that research via federal grants can result in real-world benefits, he adds, “What would be the use if the research just remains in the lab, and it just becomes an intellectual exercise? If you are good stewards of federal taxpayer dollars, you make sure that as much of the taxpayer dollars [as possible] actually get into the hands of the consumers and the taxpayers.”

Colleges and universities are eager to showcase tangible accomplishments stemming from federal grants from: the Department of Education; Department of Energy; Health and Human Services; Homeland Security; Department of Justice; Department of Labor; the Department of the Interior; Department of Transportation; Veterans Affairs; the Environmental Protection Agency; the Food and Drug Administration; and Health Resources and Services Administration, for example. The latter entity provided Cooper Medical School of Rowan University with a $350,000 grant for educating future primary care providers who will help transform healthcare systems. Mandayam says, “This grant is providing educational techniques to educate a new generation of physicians who will pursue primary care, and it provides them with opportunities to engage in primary care during their residency, and during course of study at Rowan University. This is an example of a federal investment that will have a huge payback for the state and for the region.”

Following is a brief exploration of select federal grants at various New Jersey institutions, which reveals both research vitality and the related contributions New Jersey colleges and universities are making to the state, the nation, and the broader world.

More specifically, Stockton says it “has received a grant from the National Institute of Neurological Disorders and Stroke (NINDS), part of the federal government’s National Institutes of Health (NIH), to examine a neurodevelopmental pathway in the brain.

“The project, announced in August, will investigate the mechanisms in neural stem cells (NSCs) that can lead to neurological pathologies. The three-year project, with total funding of $380,133, is titled ‘Akt-mTOR Pathway Impact on Neural Stem Cell Fates.’

“Stockton students will have a major role in the research, with at least two students working full time each summer during the project,” says President Harvey Kesselman. “This reflects Stockton’s commitment to providing opportunities for faculty-mentored student research and to keeping our focus on ‘students first.’”

Stockton reports that Nathaniel Hartman, assistant professor of biology, is the principal investigator for the project. Peter Straub, dean of the School of Natural Sciences and Mathematics (NAMS), is a co-investigator. A principal investigator (PI) is the holder of an independent grant administered by a university and the lead researcher for the grant project.

Meanwhile, Seton Hall University reports that, “Sergiu M. Gorun, professor, Department of Chemistry and Biochemistry, is the director of the Center for Functional Materials at Seton Hall. The research in Professor Gorun’s laboratory is aimed at designing new materials exhibiting multiple functionalities. The holder of numerous patents, Professor Gorun has received in excess of $600,000 recently from the Department of Energy, Department of Defense, the National Science Foundation and other granting agencies, and benefited from the contributions of several US and foreign collaborators, including Belgium and Canada. The research is ultimately aimed at providing new ways to mitigate a range of issues from cancer, to pollution and corrosion using only air and the sun. Several patents protect the new technologies, developed in part via a Small Business Innovation Research (SBIR) program in conjunction with an industrial partner.”

At Montclair State University, a $300,000 National Science Foundation grant was awarded to Dirk Vanderklein (Biology, College of Science and Mathematics), Julie Dalley (Research Academy for University Learning), Joshua Galster (Earth and Environmental Sciences, College of Science and Mathematics), and Nina Goodey (Chemistry and Biochemistry, College of Science and Mathematics) for the first year of “STEM Pioneers: A three-year pilot study to increase science literacy and STEM enrollment among first-year, first-generation students.” The university says, “The project will address the gap between best practices and diverse student populations by integrating academic, community, institutional and social support structures and analyzing how this approach may mitigate known factors of barriers-to-entry, such as lack of academic/cultural capital, social support, and institutional navigation.”

New Jersey City University (NJCU) reports that it has “been awarded a $5.7-million US Department of Education Title III grant through the Hispanic Serving Institutions (HSI) Program. The five-year grant will enable NJCU to implement a program of interventions intended to increase the number of Hispanic and low-income students attaining degrees in six STEM (Science, Technology, Engineering and Math) fields at the university.”

In announcing the grant award, NJCU President Sue Henderson states, “This generous federal grant will impact significantly the future of STEM in New Jersey and beyond. By increasing Latino participation in the STEM professions, we will take an important step towards strategically building our nation’s workforce, strengthening our scientific community, and advancing global research and innovation.”

NJCU says, “The overall goal of the initiative is to increase graduation rates and enhance the educational experience of STEM majors through improved laboratory facilities and academic support services. About 56 percent of NJCU’s undergraduate students belong to underrepresented minority groups, and 52 percent of NJCU’s undergraduates are transfer students, largely from six nearby minority-serving community colleges.”

William Paterson University says it “receives federal funding for a number of programs. Two significant grants are particularly important because of the impact they have locally to improve high-needs urban schools by building and supporting strong educational leadership and by identifying and preparing a strong corps of math and science teachers for the region and the state.

“The Learners as Leaders grant is a five-year, $3.1-million grant funded by the US Department of Education. This is a collaborative project between William Paterson University and Paterson public schools focused on improving the performance of students in Paterson by identifying, selecting, preparing, retaining and supporting highly effective school leaders. The project began in 2013.”

It adds, “The Robert Noyce Scholarship Program, Phase II, funded by the National Science Foundation for more than $1 million, is a program that provides scholarships to science and math students who are interested in becoming K-12 teachers. This program is a partnership with Mercer County Community College, with which William Paterson University has an articulation agreement, and Paterson public schools. The five-year project began in 2015.”

At Ramapo College, a $680,496 grant from US Department of Education via the state’s Department of Education focuses on the following: “The Paterson school district has a compelling need for programs that will engage students in the disciplinary core ideas and crosscutting concepts in science. Through the PASS program, Ramapo College educators work with Paterson elementary teachers (ambassadors) to gain content knowledge to improve and align curriculum modules and evaluate design approaches to enhance and deepen science understanding for their students. Ambassadors will then introduce this process to their colleagues.”

At Rutgers University, Robin Lally, science communicator, reports, “The National Institutes of Health (NIH) has awarded Rutgers University a five-year grant for more than $19 million for research that would lead to the development of drugs to treat toxicity from chemical agents used in a terrorist attack.

“The NIH continued funding Rutgers research to develop drugs to treat the toxicity of chemical weapons in case of a terrorist attack with an addtional $19 million.

“The grant – which first received funding in 2006 and again in 2011 – provides scientists at Rutgers, New York Medical College and Lehigh University the funds they need to continue a decades-long collaboration, aimed at devising drug therapies to use if deadly chemical poisons were released into the general population. Over the course of this project, NIH has provided more than $60 million to these investigators for this research.” Of note, Rutgers’ overall NIH funding increased by 16 percent last year (from $138.7 million in 2015 to $160.9 million in 2016).

New Jersey Business magazine met with Terri Goss Kinzy, vice president for research and professor of biochemistry and molecular biology and pediatrics at The Office of Research and Economic Development at Rutgers, who provided a view of Rutgers’ myriad federal grants focused on life sciences research.

With so much widespread attention focused on the United States’ political climate, some people are wondering whether or not politics will have an impact on federal grants provided to higher education institutions. Overall, Kinzy says, “I think at the highest level, the one thing that we do know is that support for research is generally a nonpartisan issue. Generally speaking, there is an understanding of the importance of research, both for its own benefit, economic development and job creation – for the 21st century jobs that we want to have in this country.”

She adds, “I do believe there is an understanding that nobody supports cancer; people support cancer research. People understand the impact of heart disease, and the costs. And the level of funding for biomedical research is a matter of national priority to a lot of people. That is a positive. On the other hand, it is discretionary spending, and, so, when things like sequester are talked about, it can be very damaging to sustaining the research infrastructure. The important message at the 20,000-foot level is that solid, consistent, stable funding will allow research to continue, and allow innovations to be translated [and] picked up by companies and evolved into products.”

Another example of this recognizes that New Jersey Institute of Technology’s (NJIT) research enterprise is categorized in four broad clusters: life sciences; engineering; sustainable systems; and data science and information technology. Regarding the many grants NJIT is involved with, Atam P. Dhawan, PhD vice provost for research (who is also a distinguished professor in the Helen and John C. Hartmann Department of Electrical and Computer Engineering at NJIT), echoes others’ sentiments when he concludes: “The paradigm has been shifted to understanding the translational pathway first, and seeing, ‘If we are going to do this particular research, where is this going to end? How does that particular research lead towards society’s, the market’s, or technology’s needs – and what will be the next generation technology?’ Today, for any particular research enterprises – whether they are in academia, or they are in other federal organizations – it is very important for them to have a vision regarding where this research is heading, how it is going to serve society, and how it is going to create more jobs and economic growth.”