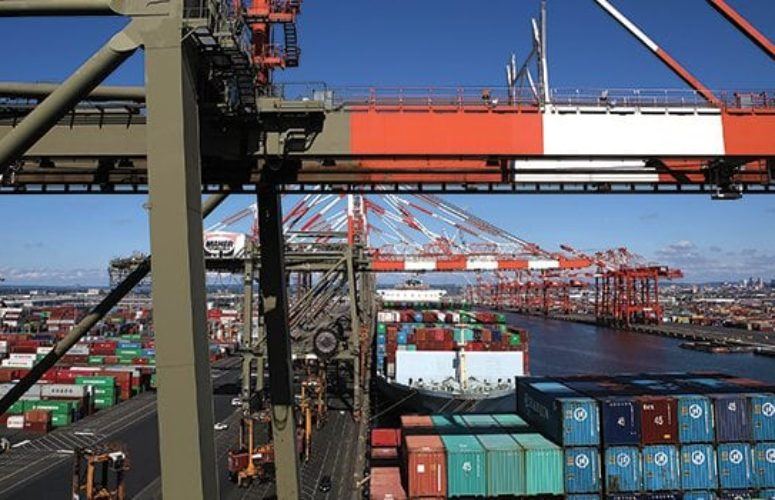 Some $250 million has been invested at the Maher Terminals in Elizabeth for cranes and cargo handling equipment. This includes the purchase of 36 new straddle carriers and the ordering of an additional 36. Another $6 million went into new gate technology at Maher Terminals to cut down truck turnaround time, which so far has seen a reduction of 21 percent.

Deeper channels and rebuilt bridges mean New Jersey will see more large cargo ships that feed a significant portion of the state’s – and the country’s – commerce and industry.

Seeing a recent upsurge in cargo volume, ports across New Jersey are poised to experience even more activity this year and beyond. Improvements designed to increase accessibility of the state to some of the largest oceangoing cargo ships may have a cascading effect on job creation in industries related to the expanded port activity.

According to the New York Shipping Association, the port industry of New York and New Jersey accounted for nearly $8.5 billion in federal, state and local tax revenue in 2016.

The activity the Port of New York and New Jersey is enjoying stems from the overall health of the economy, but also the greater capacity afforded by raising the Bayonne Bridge and deepening the channel, says Molly Campbell, director of port commerce for the Port Authority of New York and New Jersey. “Everyone is working in concert to do what they can at all six of our terminals.”

Clearance of the bridge elevation, which was completed in mid-2017, along with the deeper channel, has already shown its influence on the shipping industry with the potential for even greater cargo volumes this year, she says. Furthermore, a number of customers at the terminals have taken the initiative to work on gate expansions and bring in more cranes to handle the influx of cargo. “We are partnering with carriers and others to work together as the markets change,” Campbell says.

Upgrades at the ports are not just about bringing in bigger ships. Once shipments arrive, they need to be transferred to terrestrial transports, requiring new developments in rail and road infrastructure as well. The Intermodal Container Transfer Facility (ICTF) at Greenville Yards is slated to open by year’s end to increase throughput of cargo from the port terminal in Bayonne to the rail lines. The ICTF rail project is expected to increase the lift capacity there from 1 million to about 1.5 million boxes moved on railcars, Campbell says. There are also street improvements underway at the port to handle the greater volume of cargo that must be moved by truck.

There have also been upgrades in managing truck activity to better accommodate the higher volumes of cargo. GCT (Global Container Terminals) Bayonne instituted an appointment system in 2017 that has already reduced the truck turnaround times by 47 percent, Campbell says.

The truck appointment system takes reservations between 6 a.m. and 1 p.m., which reduces turnaround time to 45 minutes for a single move or one hour for a double – the dropping off and picking up of cargo, she says.

Some $250 million has been invested at the Maher Terminals in Elizabeth, Campbell says, for cranes and cargo handling equipment. This includes the purchase of 36 new straddle carriers, which literally straddle cargo containers, lift them up and move them to transport. Another 36 straddle carriers have also been ordered by the terminal. There are also plans to increase crane size there. Another $6 million went into new gate technology at Maher Terminals to cut down truck turnaround time, which so far has seen a reduction of 21 percent.

Meanwhile, container shipping company Maersk has a new inbound gate being installed at the APM Terminals (APMT) at Port Elizabeth. The dredging project there has been completed and new cranes are also on order. There have also been information technology improvements on cargo handling equipment at the terminal, Campbell says. “APMT and PNCT are looking to implement – sometime this year – the appointment system that GCT Bayonne is already using to speed up movement of cargo.”

According to the latest study, released last October, more than 400,000 jobs stem from the cargo activity at the Port of New York and New Jersey. That is an 18 percent increase from 2014, the last time the study was conducted. Of those jobs, Campbell says some 200,000 are direct jobs in New Jersey. This includes longshoremen, truckers and other roles involved in moving cargo. Coupled with the reach of the rail and road infrastructure here, the port remains a significant part of national commerce. “Within 250 miles of the port is about 20 to 25 percent of the GDP for the country,” Campbell says, “which says a lot in terms of the economic impact and reach.”

With the upgrades that have been made, or are underway, a new port master plan is being developed to take a fresh look at what that reach could be and how best to maximize capacity and opportunities. “That is going to be a roadmap for us,” Campbell says.

Larger ships are coming to the port, along with the need to offload more cargo that must be moved faster. Thanks to this trend, the Port of New York and New Jersey has gone from seeing ships with 5,000 to 6,000 TEUs (twenty-foot equivalent units, a measure of cargo container capacity) to 14,000 TEU ships, Campbell says. “We want cargo at this port,” she says. “We want to make sure we are efficiently handling it.”

The further development of New Jersey’s ports can be a far-reaching boon to the state and region, says John Nardi, president, New York Shipping Association (NYSA), a trade organization for ocean cargo carriers and terminal operators.

“A rising tide lifts all boats,” he says. “Port activity means jobs in the warehouse sector and other related businesses.” Every major port in the north has seen significant growth and he says the state has hit the point where much of the infrastructure improvement projects, including on land, are starting to show they could have a significant effect. This includes the rebuilding of the Pulaski Skyway, and the replacement of the Goethals Bridge and Outerbridge Crossing. “We need to stay on course with refurbishing the infrastructure and additional rail,” he says. Ocean cargo shipments, storage and land transport are all interrelated, he says, making the next steps critical as the ports expand. “Warehouse space is getting pretty tight and space is at a premium,” Nardi says.

Upgrades have also been underway at the South Jersey Port Corp., says Kevin Castagnola, executive director and CEO. “In terms of tonnage, 2017 was a record year for South Jersey Port because the first phase of Paulsboro Port came online,” he says. “Salem Port is seeing greater gains from their exports of sand.”

South Jersey Port handles two facilities in Camden, a small facility in Salem, is building a new port in Paulsboro, and operates a foreign trade zone, Castagnola says. Its jurisdiction in the state extends along the Delaware River from Mercer County to Cape May County.

Paulsboro Port, a former brownfield, first opened in March 2017. However,  a full year’s worth of activity had not yet been recorded. Currently, steel slabs are shipped through the port, and the activity of the customer at the site has already exceeded Castagnola’s expectations. “In the first 10 months, we saw 1.5 million tons of slabs,” he says. “Initially, the projection was around 1.1 million or 1.2 million tons for the first year.”

The steel slabs that pass through Paulsboro Port are sent to mills in Indiana and western Pennsylvania, he says. As the port continues to develop, Castagnola expects more commodities and greater volumes to move through Paulsboro. The future of the port will include building up the piers, along with landside, built-to-suit projects for customers who set up shop there. The near-term plan, he says, is to advertise for bids to construct the piers. “To build the rest of that out will take close to three years,” Castagnola says. The total footprint available for Paulsboro Port is about 190 acres.

The site is a former tank farm on property that was largely owned by oil and gas company BP. Essex Chemical held about 50 to 60 acres of the land. The tank farm and other operations on the properties ceased at least 20 to 25 years ago. While a portion that was owned by Essex Chemical has been fully remediated, the BP land continues to be treated. The land that still must be remediated can be used as long as regulatory guidelines are met, Castagnola says.

Once fully built, Paulsboro Port could generate 2,500 to 3,000 direct jobs, he says, which includes jobs in trucking, rail and tugs that bring the ships in to the port. More than 20,000 feet of state-of-the art rail was built for Paulsboro Port to handle freight, in addition to having close access to highways.

South Jersey Port Corp. is familiar with working with a variety of commodities, especially at the facilities in Camden that have done so since the 1920s. Castagnola says South Jersey Port handles steel, plywood, cocoa beans, bulk slag, gypsum and exports scrap metal. “Steel remains strong; we had a good cocoa season,” he says.

Former executive director of South Jersey Port, the late Joseph Balzano, made a decision during his tenure to pursue break bulk cargo, a choice Castagnola says helped the ports there stand out as Newark and Philadelphia steered towards container shipping. Break bulk cargo is loaded individually in boxes, bags, crates and drums. Bags of cocoa beans, for example, might be shipped to Pennsylvania to be processed into candy bars. “It’s almost anything you can see or touch that is not in a container,” Castagnola says. Moving break bulk is labor intensive, he says, but that also creates more jobs.

Even more jobs could result as port activity continues to grow, thanks to the deepening of the Delaware River channel, from 40 feet to 45 feet. Castagnola says the deeper channel is expected to be ready for use perhaps by this summer, which would allow for larger ships to call on Paulsboro Port and some berths in Camden. Greater local interest in renewable energy, particularly offshore wind turbines, could also lead to more cargo business for South Jersey Port as parts and equipment are shipped inland, assembled, and then installed. “It could create more port opportunities,” Castagnola says.