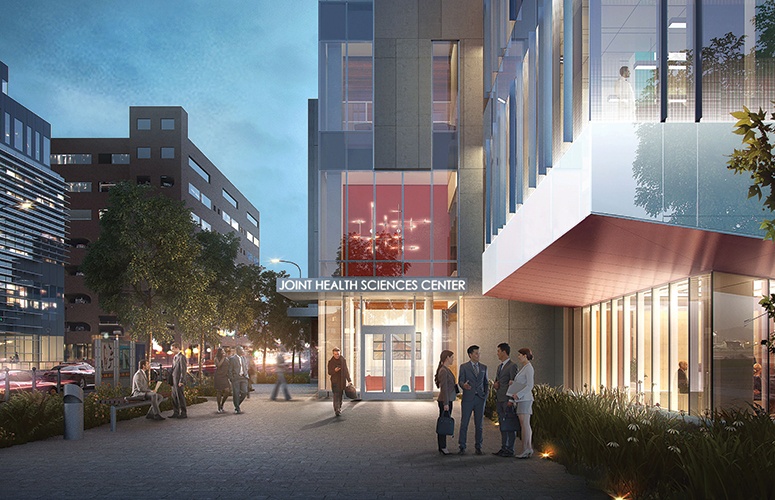 A rendering of the new Joint Health Sciences Center in Camden.
Economic Development

‘Eds and Meds’ Growth is Key to New Jersey’s Future

The interplay between academia and healthcare benefits more than just the state’s economy.

Anchor institutions such as hospitals and universities often act as magnets for economic development and catalysts for urban revitalization. Collectively, the industry clusters that these anchor institutions make up in cities across the country, and more locally here in New Jersey, are known as ‘eds and meds.’

“Generally, as cities across the United States have deindustrialized, the eds and meds sector has become a catalyst for urban revitalization,” says Louis S. Bezich, M.P.P., senior vice president, strategic alliances, Cooper University Health Care and chairman of the Camden Higher Education and Healthcare Task Force. “This is evident in Camden where Cooper University Health Care has been an anchor institution for more than 130 years and its growth has helped encourage strong revitalization efforts.”

When Camden lost half of its manufacturing jobs and most of its middle class between 1950 and 1970, a calculated decision was made by constituents to invest in higher education and healthcare, a decision that Bezich says was driven by the idea that eds and meds could provide a significant return on investment.

“Camden’s educational and medical organizations serve as magnets, which have drawn a number of businesses and industries to relocate to the city and more than $3 billion of investment,” Bezich adds. “These eds and meds organizations provide jobs, maintain real estate, boost the economy, support local business through the purchase of goods and services providing opportunities and a better quality of life for city residents.”

“Education and medicine is the fastest growing job sector in New Jersey, and is among the top sectors nationwide,” adds Chairman of the Rowan University/Rutgers–Camden Board of Governors, Jack Collins. “By 2020, estimates suggest that as many as 1 in 6 New Jersey jobs will be in eds and meds.”

Of course, the direct effects of eds and meds institutions aren’t limited to short-term economic gain, but also the long-term investment into the cutting-edge research and innovations made possible by the very nature of the industries.

Investing in a Biomedical Research Hub

Since he took office, Governor Murphy has put into place numerous initiatives and continues to tout his desire to bolster New Jersey’s innovation economy. The state’s hospitals and universities in particular lend themselves well in contributing to this cause.

“For an innovation economy like the one the governor proposes, you need a workforce that is ready to think creatively. You need a workforce that, regardless of the academic major, understands the interconnectivity of everything,” Mike Sepanic, associate chancellor for external relations, Rutgers University–Camden, says. “When you have a research driven institution like Rutgers-Camden, you have students who are able to engage with faculty who think in a broad spectrum and connect dots from multiple sources. It gives students that inquisitiveness – that desire to try to build something new.”

The research being done at these institutions not only stimulates the minds of the future workforce, but also leads to the next generation of innovative breakthroughs that, in turn, can provide long-term economic and societal payoffs.

“Research is key. The new ideas that get conceived in New Jersey are, in all likelihood, going to stay in New Jersey. As [the ideas] mature, they are going to create jobs, become spin-off companies, and require suppliers and investment in capital structure,” Sepanic says.

Anthony Lowman, Ph.D., provost and senior vice president for academic affairs, and professor of chemical and biomedical engineering, at Rowan University, says that his university has made tremendous strides in its focus on becoming a top notch research institution.

“There’s often a misconception that research and high quality teaching don’t go hand in hand, but in reality they do,” Lowman continues. “When you have the ability to bring these projects and world class faculty into the classroom, they translate what they are doing in practice to that same, innovative educational approach.”

Perhaps a symbolic representation of the state’s eds and meds sector is the new Joint Health Sciences Center (JHSC) in Camden. This $70-million, four-story building will be used by Rowan University, Rutgers University–Camden, Camden County College and Cooper Medical School of Rowan University for research, education and training.

It includes research laboratory space for Rowan University and Rutgers University-Camden, simulation rooms for medical students at Cooper Medical School of Rowan University, instructional space and simulation labs for Camden County College, office space for the Board of Governors, a first-floor café, a rooftop terrace, and general-use multipurpose spaces.

“This building is the future,” Sepanic says. “It’s an example of how to maximize public investment in growth. It provides each institution with a facility that each needs individually, but the people of New Jersey are paying for one building instead of three. And, not only does it maximize public investment, but now you have researchers from different institutions and different research backgrounds who are working in the same space. That’s how cross pollination happens, and how research partnerships that otherwise might not emerge, happen.”

“The JHSC represents the promise of economic sustainability in Camden long after this building is opened,” Collins says. “Because of the unprecedented collaboration taking place here, Camden will see accelerated job growth, increased investment in businesses and start-ups, and an influx of professionals and students who will actively participate in the local economy.”

New Jersey’s eds and meds clusters are not limited to the southern portion of the state. In fact, RWJBarnabas Health and Rutgers University in New Brunswick entered into a public-private partnership last year to jointly operate the state’s largest and most comprehensive academic health system.

RWJBarnabas Health will invest $100 million initially, and then more than one billion dollars over 20 years to expand in the education and research mission of the integrated academic health system.

“It wasn’t enough to have a loose affiliation with the medical schools,” says Barry Ostrowsky, president and chief executive officer of RWJBarnabas Health. “You needed something more intimate – a platform in which the school and the healthcare system would be mutually invested in each other’s success.”

Ostrowsky says the idea behind the partnership was to bind Rutgers University and its various heathcare educational assets to RWJBarnabas Health to create an academic based-healthcare delivery system that would invest heavily in medical research, expand clinical programs and be able to attract both professionals and patients from around the country.

“I have met with younger professionals from around the country who are considering now coming to New Jersey to be part of our Rutgers partnership and selling New Jersey as a place to live and raise a family,” he adds.

In addition, RWJBarnabas Health will also fund the construction of a new clinical and research building for the Rutgers Cancer Institute of New Jersey, the state’s only National Cancer Institute-designated comprehensive cancer center, as well as a new ambulatory care center, both in New Brunswick.

While the state’s eds and meds clusters are developing world-class talent, it’s important not to lose that future workforce and the innovations that come along with it due to outmigration.

“Unfortunately, as a state and as a healthcare industry, we have not done a terrific job in making sure that those who we train stay to treat the people that live in New Jersey,” Ostrowsky says, adding that he does feel that there are solid efforts within the industry to keep talent in the state.

“For instance, in our partnership with Rutgers, we have put up a significant amount of money to encourage those coming out of training to stay in New Jersey – particularly in our system – by extinguishing their student debt over a period of time,” Ostrowsky explains. “I think we can create the kind of financial arrangements that help.”

He adds that showcasing the state’s strengths goes a long way in attracting the types of professionals that you want.

“If you are inclined towards science and medicine, we can show a plan that we and others in the state have, to ensure that New Jersey rightfully takes its place as one of the leading states in the development of medical research and the provision of state-of-the-art care,” Ostrowsky says. “A true professional wants to hear more about that than he or she does about property taxes. If you have the right plan and can show evidence that it’s happening, and will happen at an accelerated pace over the next number of years, that will be persuasive to committed professionals who want to provide for their career paths in that type of environment.”

“There has to be an investment in the researchers when they get there,” Lowman adds. “They need state-of-the-art research tools, facilities that support their grants, and you need the ability to commercialize the discoveries out of their labs.”

Ultimately, the success of investing in eds and meds hinges on the individuals who make up the collective.

“The most important thing you can do is bring in the minds to actually generate the ideas,” Sepanic says. “If you want to be a center for innovation, it’s a people intensive industry.”

The school was opened last year with the goal to transform medical education and to help ease the shortage of physicians in New Jersey, estimated at 3,000 by 2020.

In its second year, the innovative curriculum includes: a 3-year path to residency to make a medical education more affordable; partnering students with patients in underserved communities so they better understand the social determinants of health; and interdisciplinary learning so that graduates are prepared to provide team-based care which research shows improves outcomes.

“Our goal is to maximize health in all of the communities we serve, a goal best achieved through an interdisciplinary approach based on an understanding that health and wellness, as well as disease and sickness, occur where people live, work and play,” says Dr. Bonita Stanton, founding dean of the Hackensack Meridian School of Medicine at Seton Hall University.

The three-year path to residency – one of just a handful of such programs in the nation – also helps reduce the cost of medical education. Medical school graduates emerge $180,000 in debt on average in the US The Hackensack Meridian Health Board of Trustees also has provided a $100-million endowment fund for scholarships to the school, fulfilling a high priority to ensure top students can afford a medical education, according to Robert C. Garrett, CEO of Hackensack Meridian Health.

9 Questions to Ask Before You Retire