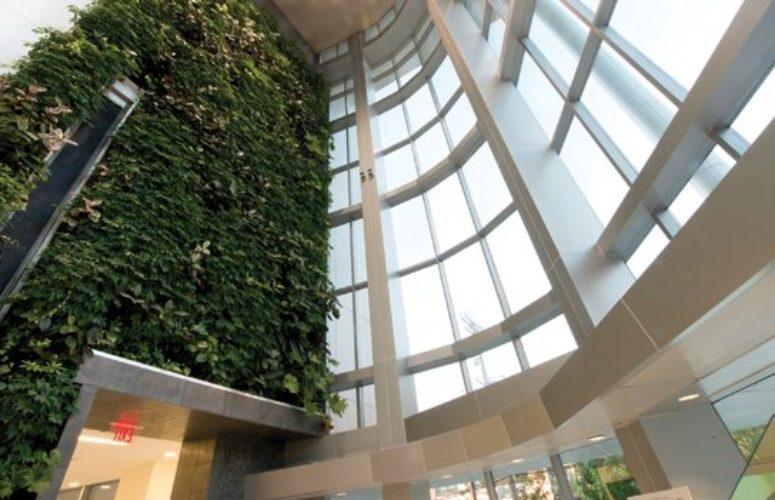 HackensackUMC’s Living Wall at the John Theurer Cancer Center is made of more than 30 plant species, all hydroponically growing without soil. It is designed to be a symbol of rejuvenation and strength that all living things share.

Discover the businesses and institutions that are committing to a clean environment.

On April 22nd, Earth Day will be celebrated by more than 1 billion people around the world. First celebrated in the United States in 1970, it was established to promote environmental awareness and solutions through programs and events.

In New Jersey, Earth Day efforts focus on a variety of different areas that include water conservation, air and water quality, waste reduction, open space conservation and habitat protection, according to the New Jersey Department of Environmental Protection (DEP). Not only do various communities, schools and organizations take part in Earth Day activities around the state, but many businesses and entities do as well. However, for many of these businesses and entities, April 22nd is just another day in operating in an environmental friendly and sustainable way. In this article, New Jersey Business focuses on a handful of companies who take pride in being environmentally friendly and who have received awards and accolades for doing so.

Not only has Hackensack University Medical Center (HackensackUMC) received numerous awards and recognitions for being a top hospital for medical services in the United States, it has received multiple awards for being a top green hospital in the country. In 2014, the hospital received Practice Greenhealth’s Top 25 Environmental Excellence Award. “We were able to achieve this award because of the everyday practices we implement here,” says Kyle Tafuri, a sustainability advisor for HackensackUMC. “From recycling, reducing our waste, using green chemicals and environmentally preferable purchasing, to energy and water reduction, the list goes on and on in terms of our efforts.”

Additionally, HackensackUMC has moved away from purchasing flame retardant furniture, because of the negative link the chemicals have on human health and the environment. The hospital has used its size to “push the furniture industry to phase those toxins out of their furniture,” Tafuri says.

“Our sustainability mission is directly in line with our mission of creating the healthiest environment we can for our patients, staff and community,” he continues. “Cutting waste, reducing energy usage, getting rid of the harmful chemicals in the environment and implementing green initiatives is something we have to do in order to help prevent more people from getting sick and to keep them healthy.”

International electronics giant Panasonic has received multiple awards around the world for being environmentally friendly. The company’s Newark-based headquarters was the first newly built office tower in the city to receive Leadership in Energy and Environmental Design (LEED) Platinum Certification by the US Green Building Council for Commercial Interiors in 2014. Earlier this year, the building earned LEED Gold Certification for its core and shell architecture. The state-of-the-art, 340,000-square-foot, 12-story Class A office tower includes: bicycle parking and changing rooms; natural daylighting and occupancy-sensors; lighting controls; over 38 percent reduction in water use over industry standards, much of this achieved via low-flow plumbing fixtures; and 90 percent installed Energy Star-rated equipment such as Panasonic microwave ovens and other appliances. In its first 11 months at Two Riverfront Plaza, Panasonic reduced its greenhouse gas emissions by 56 percent compared to a similar period in its previous location in Secaucus.

“As a technology leader, [we are] very pleased to have an opportunity to leverage existing technologies to create an environmentally conscious future,” says David Thompson, director, Panasonic Corporation of North America Environmental Department.

Monmouth University recently received the New Jersey Department of Environmental Protection’s 2014 Governor’s Environmental Excellence Award in the Clean Air category, which recognizes “outstanding environmental performance, programs and projects in the state.” The university has solar panels on 11 of its buildings. The installation of the panels, which began in 2005 and continued over several years, produces approximately 500 megawatt-hours of electricity each year, reduced carbon dioxide emissions by more than 376 tons and will save the university $2.7 million over 25 years.

“When we began the solar installations, we had the largest solar power system east of the Mississippi River,” says Patti Swannack, vice president for administrative services at Monmouth University. “Today, many other schools are, and have been, doing projects like this. It is important for us to practice sustainability and be environmentally friendly because it sets an example for other schools, other businesses, as well as students and individuals around the country to be environmentally conscious.”

Bayer Healthcare was recently the recipient of the US Green Building Council New Jersey Chapter’s 12th Annual Emerald Award, which honors a project for demonstrating adherence to the principles of economic, social and environmental sustainability. That project was Bayer’s $250-million, state-of-the-art US headquarters in Whippany.

“Our world is reaching a tipping point with a growing population expected to reach nine billion people by 2050,” says Josh Decktor, director, health, safety and environment of North America Bayer HealthCare. “The increased demand for resources – healthcare, food and energy – makes it more important than ever to focus on environmentally friendly and sustainable solutions. Bayer is in a unique position to apply our life sciences expertise and address some of the most essential needs of people, animals and plants.”

PSE&G has won many awards for its various solar and renewable energy projects throughout the state. At the 2015 DistribuTECH Conference and Exhibition in San Diego, California, PSE&G received project of the year honors from Powergrid International magazine in the renewable grid integration category for its pole attached solar initiative. As part of PSE&G’s 125 megawatt-dc Solar 4 All™ program, solar panels were installed on more than 174,000 utility poles to provide 40 megawatts-dc of solar capacity in New Jersey, which saves more than 170 acres of physical space.  The solar power the units produce flow directly into the electric grid for the benefit of all PSE&G electric customers.

“The solar power they generate replaces a certain amount of traditional fossil fuel, helps return some savings back to our customers and helps us, along with the state of New Jersey, meet renewable energy needs, plus other benefits as well,” says Joe Forline, vice president, customer solutions for PSE&G.

“This was the first ever pole top solar installation in the world and it still remains the largest,” Forline continues. “Our vision statement is to provide safe, reliable and economic green energy to consumers. As a power company, I think it is important that we take that position and continue to operate in an environmentally friendly way.”

In 2014, Parsippany-based Wyndham Worldwide received several recognitions for operating in an environmentally friendly way. It was the only hospitality company named to Dow Jones North America and World Sustainability Indices and was also named to the Carbon Disclosure Project (CDP) Climate Disclosure and Climate Performance Leadership indices.

Taylor says that Wyndham instills its green practices and values on all of its employees, and through its Wyndham Green program, aims to develop environmental programs, products and services to minimize its environmental impact, among other initiatives.

“Not only does acting in an environmentally friendly way work as a recruitment tool for individuals wanting to become part of our team and for customers wanting to stay at our properties, but ultimately, we do what we do to make the earth a better place for our children and our children’s children,” Taylor concludes. “We only have one Earth and we have to take care of it the best way we can.”