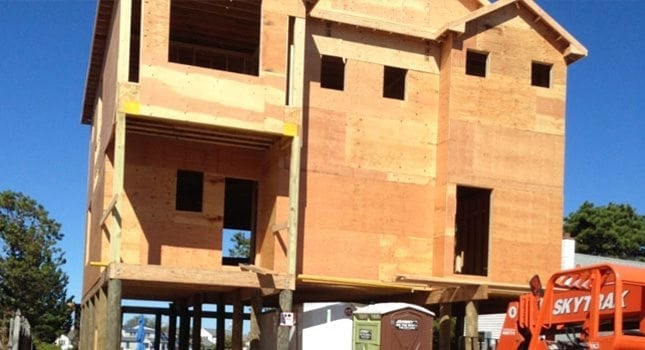 Proper consultation is critical when building or re-building in a flood zone.

If a person is building or re-building in a flood zone, it is imperative that he or she communicate with a community’s zoning/building department, a contractor, surveyor, architect and insurance professional before undertaking a project. A local community has the final say in what can be built, and to what specifications. And an insurance professional can ensure that what meets compliance also generates a favorable premium. The last situation a person wants is to discover that he or she has designed or built a structure that is unsuitable for a local community, or for insurance purposes.

Livia Hillmyer, administrator of NJM Insurance Group’s Flood Department, explains, “Keep in mind that compliance versus [the insurance] rating can be miles apart.”

Flooding has been a New Jersey headline item for several years now, and recent, various flood maps have often confused both homeowners and businesses alike. When Superstorm Sandy struck in 2012, FEMA was already in the process of updating its flood maps. Urgency was added to the process, because homeowners wanted to re-build right away, and general guidelines regarding how high they were supposed to raise their homes were unclear.

Advisory Base Flood Elevations (ABFEs) were issued, which essentially are maps that err on the side of caution; FEMA tells New Jersey Business that it strove to avoid situations in which a person would re-build, only to later learn that he or she had not built high enough to avoid future flooding. More maps (based on additional data) have since been issued, and more are on the way.

Mark Rollins, CEO/RMO Specialist (Community Education Outreach/Risk Map Outreach Specialist) at FEMA, says, “When another map comes out in four months, the people who built to these best available data now will only be stronger when the new maps come out. They won’t find out all of a sudden, ‘I built too low. And here come these revisions.’”

The two caveats are that, again, some communities continue to be cautious and are thus requiring conservative ABFE re-building heights (again, the community has the final say on what can be built), and the other caveat is that depending on the management of one’s local flood plain, flooding years from now might be higher than what any of today’s maps indicate.

Tom McDermott, National Flood Insurance Program Specialist at FEMA, explains, “If you have good flood plain management, these maps will last, and will serve the community very well. When you don’t have a strong flood plain management, and you happen to be on the top of the watershed, your consequences actually run down stream and can affect – or will affect – those communities below you.

“If finances are available, build higher than the minimum standards to protect in the long run, into the future.”

Meanwhile, NJM’s Hillmyer explains: “Compliance usually requires that a home’s living space be at or above base flood elevation, depending on what the community is going to guide. Notice I said living space. There are a host of ways to get the building raised. Popular in New Jersey are solid perimeter walls, piers, posts and pilings, and those areas [might be] enclosed.

“In an A zone, if homeowners enclose it, and don’t vent it properly, everything will come back down to the top of the enclosure space [during a flood]. That does not result in a favorable insurance rating premium. In an A zone, they have to ensure they are properly vented.

“In a V zone [Note: A V zone has the possibility of waves], homeowners need to ensure that [the raised area] is unobstructed. That means no enclosing underneath the elevated surface.”

“After [a homeowner] has consulted with a community, the best thing is to have an architect or a contractor draw up everything,” Hillmyer says. “A surveyor then puts all the numbers in. The surveyor has to come in and view all of the elevations on that site, and determine where the building is going to start, where the living space is going to start – all of that information will be needed to file for permits. After permits are obtained, construction work begins.

“As [homeowners] finish up their construction work, here’s the biggest mistake: They didn’t go to their insurance professional prior to doing all of this. Now, they come to the insurance professional and say, ‘Oops, my house is re-built. Here it is.’ And I am speaking from experience, here: We have already seen people who raised their home, and we had to come up and say, ‘Your insurance premium is ‘this.’’ And you can hear their jaw drop on the other end of the line. And they are saying, ‘Why?’ Because their enclosure wasn’t vented properly.”

Hillmyer summarizes, “It has been slightly more than a year [since Supertstorm Sandy] – and we are seeing so many people who get disappointed. But, we have also seen many who have been successful, and who are completely happy with everything. But, most of those have always consulted us. We are here for them.”

May Construction Unemployment Rates Down in 46 States