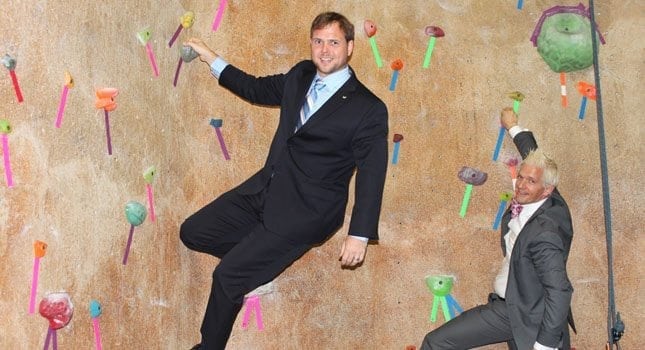 The owners of rock climbing gym The Gravity Vault show no signs of slowing down.

Two longtime friends, Lucas Kovalcik and Tim Walsh, went from the corporate world to eventual business partners, in order to fulfill a dream and explore a passion they both share – the sport of rock climbing.

In 2004, the Bergen County natives took their love for rock climbing and founded The Gravity Vault, an indoor rock climbing gym for beginners and professionals of the sport. And, in 2005, they opened their first gym in Upper Saddle River.

“We had a passion for rock climbing and saw there was no dedicated rock climbing gyms in the Bergen County area, but several smaller gyms that only included rock climbing as part of their overall business model,” Kovalcik says. “So, one day over dinner, we decided we wanted to share our love for the sport, by opening the first rock climbing-only gym in the area.”

Kovalchik says that there were misconceptions about rock climbing when the pair was first looking to open The Gravity Vault 10 years ago.

“People didn’t really understand what the sport was all about when we first began,” he says. “There was a perceived danger that was involved. When we wanted to start the business, there were a number of landlords and bankers that didn’t understand what we were trying to accomplish, and the fact that our indoor rock climbing model really wasn’t proven or as mainstream as it is today. It was a hard sell, convincing them about the knowledge we had for the sport and how we wanted to help people understand what it was all about.”

The opening of the first location in Upper Saddle River paid off for the duo, as they opened a second gym in Chatham in 2009, and, early this year as part of The Gravity Vault franchise, have a third location opening in Middletown.

“We had always planned on opening not one, but multiple corporate-owned locations,” Walsh says. “And, then, we eventually wanted to get into franchising the gym. altogether, we are looking to have five to seven locations by the end of the year.”

“Our goal is to expand across the US and make The Gravity Vault a national brand,” Walsh says. “We want to be able to share the sport of rock climbing with everyone and give our customers large, clean, safe and state-of-the art facilities to enjoy, any time of the year.”

NJ Expands Vaccine Eligibility to Those Ages 65 and Older