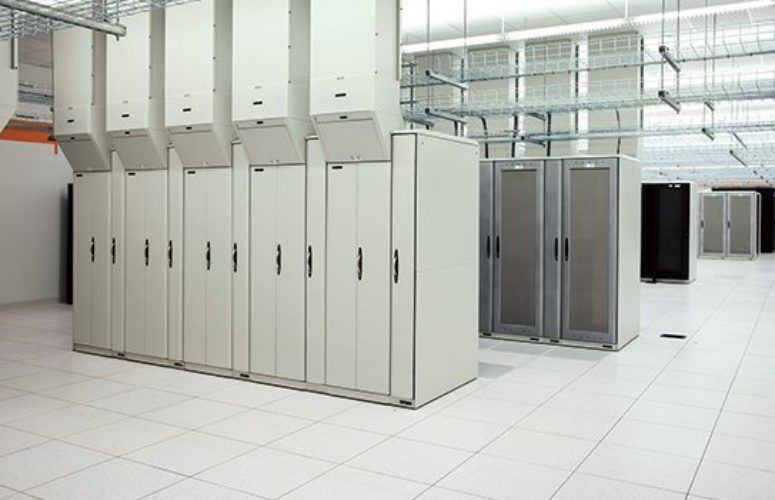 Above Photo: Structure Tone provided construction management services for this 40,000-square-foot research data center serving 8,000 faculty and students at Princeton University. The center has two main functions: Half of the white space supports grants and research programs, and the other half student records and administration.

A robust market amid a changing landscape.

From a real estate and commercial perspective, the data center business remains solid in New Jersey, given its prime Northeast corridor location. However, there are some caveats of a cyclical nature. One of those is a drain of certain uses to out-of-state locations. Moreover, a major merger of providers has altered the landscape just a bit. Altogether, though, the Garden State remains one of the nation’s prime data center marketplaces.

“The market is robust at this time,” says Terence Deneny, vice president of Structure Tone, whose company does large-scale build-outs for enterprise-type data center clients.

“A lot of what we do is focused on the co-location marketplace – over the last couple of years we’ve seen a tremendous amount of the building out of additional capacity,” Deneny says. “Some of our clients have initially built in terms of a pod configuration, where they have the ability to expand into two or three data halls over time as their needs require.”

“We see the market doing well,” concurs Tom Banta, vice president of vXchnge. “In the last 24 months, we’ve seen some big blocks coming on the market. This year, especially, we’re seeing more interest as people’s contracts run out. At the beginning of this year, we’ve seen a fairly marked interest in demand for our space, which is a good reflection of the economy overall.

“We’re seeing companies like Amazon and Google move in because this area has such high usage from a mobile perspective,” Banta says. “Sites such as our location in Jersey City are edge sites – users want to be close to their customers. That’s where e-commerce comes into play.”

While he describes the activity as “good,” Sean Brady, senior director at Cushman & Wakefield, offers one of the caveats. Although it has remained relatively strong, “absorption in the market has experienced its third straight year of decline, with somewhere around four to five MWs of new leases signed in the past year. Where a large transaction used to be a MW, we aren’t seeing many of those anymore. Today, a large transaction would be a 500 KW deal.”

One reason: “The larger transactions that aren’t latency-sensitive are considering northern Virginia and North Carolina,” Brady says. “In 2010 to 2014, corporations moving their data centers out of New York City wanted to have their IT departments within an hour of that facility. Now, however, because the price of electricity is almost half the cost in Virginia or the Carolinas, an IT and/or real estate department can fly their people to where the data center is, stay in a nice hotel, and still save a tremendous amount of money.”

“If you’re going to own your own and operate your own data center, especially if you’re operating as a Cloud provider or hosting applications that don’t have a latency requirement in terms of replication or synchronization, it’s less expensive to go to regions where power is cheaper, where there are increased tax incentives and sales and real estate tax breaks,” concurs Peter McCabe, project executive for Structure Tone.

This is changing the nature of New Jersey’s data center market. Now, according to McCabe, rather than being dominated by user-owned facilities as it has been in the recent past, it’s trending more to a colocation marketplace “in terms of facilities that can be leased out for colocation for clients.”

“The combination of Digital Realty’s and Telx’s portfolios gives customers the platform they need to grow and compete in a data-driven world,” says A. William Stein, Digital’s CEO. “This acquisition is a significant step for our strategy of delivering a range of data center solutions, real estate acumen and financial strength.”

For New Jersey, the deal effectively combines Digital’s portfolio of 3 Corporate Place and 365 S. Randolphville Rd. both in Piscataway; 650 Randolph Rd. in Somerset; and 701 Union Blvd. in Totowa, with Telx NJR1 in Weehawken, and NJR2 and NJR3 in Clifton.

Regarding some of the general trends the market is seeing: “As the next generation of IT spending occurs, corporations are realizing that not all of their data needs to be housed under one roof,” McCabe says. “Based on their IT requirements, companies can put their IT assets in several different locations, and even put some of their non-critical facilities in lesser robust facilities to save money.”

And the Cloud looms as a growing factor in the decision-making process. “We’re seeing the overall IT load of a number of our clients decreasing,” Deneny says. While those clients’ densities and storage capacities may actually be increasing, “a lot of applications are going for the Cloud.”

“Outsourcing and evaluating Cloud is still something a lot of people are looking at,” Brady agrees. At the same time, however, some of the corporations that were early adopters of Cloud services “are finding that those services, depending on the application or group of applications, can be more expensive than running it yourself. Some big companies are pulling their information out of the Cloud, putting it into a colocation, and operating it themselves. One of the things that has become popular is developing programs to have Cloud be the back-up data center.”

In terms of how the trends are playing out in actual activity in New Jersey’s data center marketplace, 165 Halsey Street, an independently owned, 1.2-million-square-foot property in Newark, reports “continued tenant growth and leasing commitments,” notes Joseph Simone, president of Tishman real estate services. “Of the five colocation rooms, two are 100 percent occupied. The facility presently serves a total of more than 150 customers.”

In Monmouth Junction, in the Princeton-area market, Agile Data Sites has launched a new 8,000-square-foot data center offering customized collocation and disaster recovery offerings. And that’s just the start: The site has full build-out capacity expandable to 45 MWs and 200,000 square feet of available space, according to Agile President and CEO Jeff Plank.

In terms of new construction, Agile’s facility appears to be the exception, however, with the expansion of existing facilities being the major thrust. “There is no new construction – the New Jersey market is overbuilt with several years of vacant space available,” Brady says.

Interestingly, however, data centers are growing in popularity as an investment, Brady notes. “It is a very stable investment,” he says, likening it to residential as “a property with many tenants. When one tenant moves out, it’s not going to hurt.” The only drawback: “Short leases can make landlords nervous.”

In any event, activity continues, with third-phase work planned for Sentinel Data Centers’ 430,000-square-foot NJ-1 facility in Somerset. According to co-CEO Josh Rabina, Sentinel acquired an existing warehouse in Somerset in 2011, fitted it out in phases, brought in a 40 MW utility substation and has built and occupied much of the first two phases.

Sentinel also recently leased and implemented more than five MWs of Transmission+, a high-availability infrastructure-light power solution to multiple tenants at the Somerset facility. “The ability to vary resiliency and cost on a workload-by-workload basis is clearly resonating,” Rabina says.

Another upgrade at NJ-1 in Somerset: Cross River Fiber has completed its build-out, offering tenants access to dark fiber, wavelength, Ethernet and other network services.

Upgrades have also been made by vXchnge, which has made Console, an enterprise software and interconnection platform, available in its six markets, including its Secaucus facility. The company has also added Cogent Communications, an Internet access and data transport provider, to both its Secaucus and Jersey City data centers.

Also, according to Banta, vXchnge recently launched a new release of its portal. “It’s a whole new user experience redesign, giving customers more insight into our data centers,” he says. “It integrates various components, such as RFID and DCIM, giving users more flexibility.”

As a rule, data center upgrades can also be purely routine, because equipment has a shelf life. “We’ve had series of projects of upgrading infrastructures for equipment reaching the end of its useful life,” says Structure Tone’s Deneny. “It’s a matter of keeping the data center alive by upgrading and replacing UPS power systems, generators, cooling systems, mechanical and electrical equipment while maintaining the white space. We’re also seeing a lot of new energy efficiency in terms of equipment being deployed.”

“We see new technologies that are driving efficiency up in an attempt to drive costs down,” McCabe adds. “We are outfitting these plants to make efficiency the driver to save the dollar.”

Regarding costs, what do data center users pay for services provided? “It varies dramatically,” Banta says. “For a single cabinet, it depends on how much power is put into it. You hear the term ‘density’ – we want people to be able to put in as much power as they need. Years ago, you’d see two and three KW cabinets. Now we’re seeing upwards of 15, 16 to 20 KW. That allows customers to grow within a cabinet space fairly easily.”

“The cost is less related to square footage and more to power density,” Rabina concurs. “The low end of the market tends to be 100 watts per foot of 2N, Tier 3 plus resilience-level power. They would pay a very different price than if they wanted 300 watts per foot. We have the ability to fine-tune each space to the exact needs of the tenant.”

In terms of actual numbers, “every user will be different,” Brady agrees. “Colocation wholesale pricing might range from $150 to $200 per KW per month, and colo-managed service might start at $200 per month and up. Full managed service could be $250 up to $800.

Going forward, “the market continues to be healthy,” Rabina says. The data center market does, however, reflect the cycles of the industries it serves, notably financial services. That sector “is still working its way out of the last downturn, but we’re seeing healthy demand,” he says.

Healthy enough for Sentinel to be “always casting around” in terms of new locations. “We’re nearing capacity in Somerset, and we’re clearly looking,” says Rabina.

“We view this as a very big market, a viable market,” concludes Banta, who notes that vXchnge also has nearby data centers in Manhattan; Chappaqua, New York; and Philadelphia. “We’ve had some early discussions about expansions in this area, including New Jersey. When a data center fills up the question becomes, ‘Where do you expand?’”