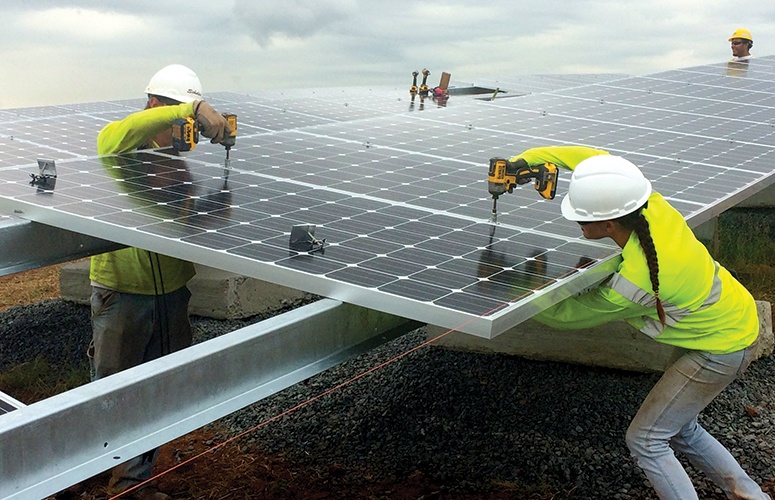 Construction Trades Lay the Foundations on Which NJ Works

Discover how these trade unions are gearing up training programs to address emerging technologies and aging infrastructure.

New Jersey’s construction trade unions are providing the manpower for infrastructure and energy improvements that will help the state’s economy continue to grow. Membership, which has steadily decreased for many union locals over the past two decades, seems to be stabilizing and – in some areas of construction – it is growing again.

According to the US Bureau of Labor Statistics, construction trade union membership in the US has been stable or up slightly for the past several years, increasing from 13.2 percent of construction jobs in 2015 to 13.9 percent in 2016 and 14 percent in 2017, with more than 1 million union construction workers nationwide. The NJ State Building and Construction Trades Council reports that more than 100 union locals represent more than 150,000 rank-and-file members.

Labor’s Role in the NJ Economy

“When you hire a union contractor, you’re getting people from your area. Our members live in Middlesex County. When we get paid, we spend our money right here,” says Michael McLaughlin, president of International Brotherhood of Electrical Workers Local 456, in North Brunswick. Local 456 has seen membership increase slowly to approximately 1,000, even as its baby boomer members retire. “The great advantage of the union system is that we can call qualified outside help as was done after Super Storm Sandy. We’re the guys, when it’s snowing and you lose power, who are putting our boots on to go to work.”

In helping to execute infrastructure and energy upgrades, the construction trades are contributing to the overall state economy as well.

“When a company moves to New Jersey or expands, it’s a sign that our state is becoming desirable once again. If a state isn’t constantly moving and redefining itself, it will lose its competitive edge,” according to Patrick Delle Cava, business manager and principal officer of IBEW Local 102, in Parsippany-Troy Hills. Construction growth impacts numerous other industries from supply companies delivering materials and tools to the local delis providing breakfast and lunch to workers. “When our members are working, many other businesses do well as a result. The permanent employees who follow will also support many local businesses, supply companies, maintenance and cleaning services.”

Local 102 currently stands at 2,900 members, but membership has been steadily decreasing since 2004, primarily because of the loss of manufacturing, but also because of declines in private-sector growth and new labor-saving technology such as the use of data loops to replace hard-wired control circuiting, and wireless control, as well as the exodus of baby boomers retiring from the trades.

Union training and apprenticeship programs contribute to the economy by enabling private contractors to take advantage of training they otherwise would have to provide. “The IBEW provides the labor for everything we do and everything we do is dependent on it. They are the face of the company,” Alan Golup, vice president of the National Electrical Contractors Association, the collective bargaining agent for employers using IBEW workers, says. “It’s the only national training program that I know of and it is state of the art. They put a lot of effort and money into providing and maintaining the workforce.”

The governor’s Apprenticeship Network initiative will establish an Office of Apprenticeships in the state’s Department of Labor and Workforce Develoapment to develop programs through a new Apprenticeship Innovation Fund, for which Gov. Murphy allocated $10 million in the fiscal year 2019 state budget. The program will focus on demand-driven apprenticeships in high-growth sectors such as advanced manufacturing, clean energy and utilities, IT and software, and healthcare.

Local 825 of the International Union of Operating Engineers, based in Springfield, has been working to bring enhanced mechanization and computerization to its training and is moving forward with a plan to raise its training program to a new academic level.

“Since the beginning of 2017, we’ve had a project underway to turn our own training center into an institute of higher learning and eventually a junior technical community college,” Greg Lalevee, business manager for Local 825, notes. The union expected to apply for licensure in August or September and spend approximately 14 months developing the program and building an administration around it. “Blue-collar workers are stigmatized because, ask any parent, and they want their kid to go to college. By turning ourselves into a technical community college, we will be in a position to destigmatize working in the trades and get parents to understand this is a good future for their children. We know the technology is moving to a place that young people like. We’re just trying to harness that. We want to be able to train our members appropriately for future workers to keep our trade alive.”

State Assemblyman Joseph V. Egan, business manager of IBEW Local 456, who represents the 17th District in Middlesex County and chairs the Assembly Labor Committee, says getting young people interested in construction trade careers is critical to their future as well as the state’s economy.

“When the unions do well in an economic sector, whether it is the building trades, manufacturing or otherwise, that entire sector sees an improvement,” Egan says. “Apprenticeships have been modernized with more demanding aptitude tests and selection procedures, computer training, and civic duty. As people become disillusioned by the high cost of secondary education, I believe we will see even more interest in apprenticeships – not just in the building trades, but throughout New Jersey’s industries.” Local 456’s apprenticeship lasts five years and the local accepted just 20 people as apprentices this year.

Delle Cava says the construction trades increasingly are gearing training to the future.

“What construction unions learned long ago is that it’s all about position and capture – train now for what is coming and grab a huge chunk of the market when a new technology emerges,” he says.

Delle Cava of IBEW Local 102 says the state’s economy continues to lag that of New York overall, but some state industries – data centers, logistical warehouse and distribution facilities, and pharmaceutical companies – are thriving here. Major sources of work for Local 102 members include projects for Barclays, Celgene, Ralph Lauren, dorms at William Paterson State University, and a J.P. Morgan data center on which construction is about to start.

“Future growth will come in part from millennial and generation Z economies as well as the businesses attracting them, also aging boomer-driven businesses like healthcare and assisted living,” he says. “Technological businesses such as electric cars and alternative energy generation will also play a roll.”

He applauds the drive on the federal level to bring metal fabrication and production back to the US and expects developers to take steps to balance the impact of proposed Trump Administration tariffs. “Smarter developers and contractors will hedge in the steel, aluminum and copper commodity markets to protect themselves from rising metal costs,” Delle Cava notes.

Lalevee of the Operating Engineers, says that, historically, tariffs have not worked very well, but may have less impact on construction in New Jersey, where the re-funded Transportation Trust Fund is expected to generate highway repair projects.

“I’m sure [tariffs] impact the cost of steel, but I’m not sure how much it impacts road work. One of the nice things about the road construction is the materials – stone, asphalt and concrete – are made in the state,” he says. Local 825’s membership is growing slowly and now stands at 7,100, up more than 10 percent over the past eight years. “Generally, I think that trade unions are an aging workforce. The average age has dropped over the last two years and is somewhere in the mid-40s now.”

NECA’s Golup says contractors are finding increasing opportunity in mixed-use redevelopment and residential development. “We’re seeing what seems to be a major residential boom in high-rises along the waterfronts and in Bergen County. Internet companies as well as healthcare, higher education and pharmaceuticals are reinvesting in New Jersey.”

“The utility companies are doing a tremendous amount of work upgrading their infrastructure,” Lalevee says. “Along the shore, we are still doing work that is a response to Super Storm Sandy as well as beach replenishment projects. Generally, our infrastructure is 80- to 100-years old and utilities are doing a great job of modernizing.”

While some in the construction industry are frustrated that the Transportation Trust Fund, bolstered by the recent 23-cent increase in the gasoline tax, is not producing transportation projects more quickly, Lalevee notes one of the items negotiated in the gas tax hike doubled aid to counties and towns. The fund will provide $6 million to $8 million each to Union and Essex counties for transportation improvements. The Trust plans to spend approximately $200 billion that will generate $4 billion in construction jobs over eight years.

The operating engineers are working at the American Dream project in the Meadowlands and the expansion of the Bayonne and Goethals bridges in north Jersey as well as several projects in Port Newark, where four new cranes are being assembled to handle the bigger container ships that will be able to enter the port when the bridges have been raised. Local 825 members soon will start work replacing the 80-year-old Townsend Inlet Bridge linking Sea Isle City and Avalon in Cape May County. Repairs are expected to take about two years.

McLaughlin says IBEW expects to continue working on the high voltage infrastructure in the state as well as renewable energy projects. Local 456 has installed and maintains more than 200,000 solar panels for PSE&G. “We’ve done the largest solar panel jobs in the country,” he says. “Middlesex County is a major location for warehouses and some of those flat roofs are being utilized for solar. Unless we maintain and make strides forward in the energy available and in renewable energy, New Jersey won’t be competitive.”