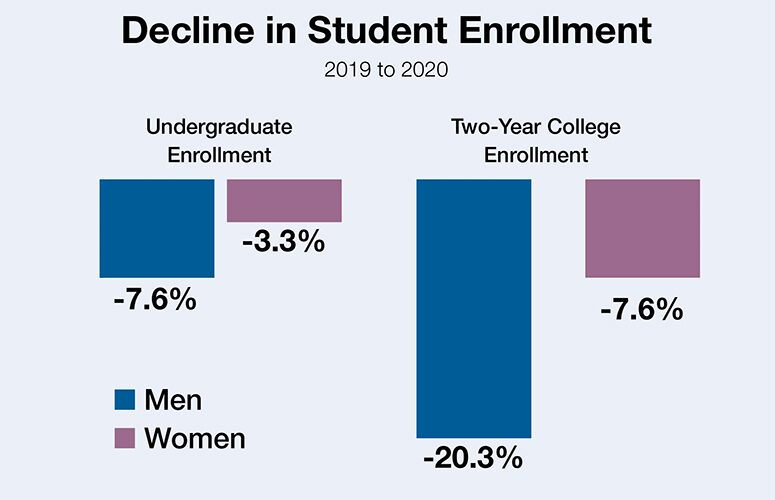 By Kyle Sullender, Executive Director of Focus NJ On Dec 1, 2021

While previous economic downturns have motivated Americans to bolster their education credentials, the COVID-19 pandemic has not had the same effect.

Insights provided by the National Student Clearinghouse Research Center this summer showed undergraduate enrollment declined 5.9% in spring 2021 when compared to the previous year.

But new data from the US Census Bureau further emphasizes the pandemic’s impact on educational achievement, and sheds new light on which students have been most affected.

While undergraduate enrollment was down overall in 2020, nationwide enrollment at two-year colleges declined even further, dropping 13.6% from the previous year, the largest single-year decline since at least 1980, according to data collected as part of the American Community Survey. Additionally, total enrollment at two-year colleges reached its lowest level since 1989 with approximately 3.7 million total students.

Outside of higher education, the pandemic continued to drive students out of classrooms. While high school enrollment has remained mostly consistent, declining just 1% year-over-year, the high school dropout rate reached 5% for the first time since 1995.

Increased rates of high school dropouts can have long-term effects on both the individual and the economy as a whole. The median weekly earnings for individuals without a high school diploma is $630, according to the most recent data available from the Bureau of Labor Statistics. Conversely, workers with a high school degree and no college earn $789, while those with a bachelor’s degree or higher earn a median weekly wage of $1,416.

In addition to lower earnings, studies conducted over the past 20 years have found that high school dropouts are more likely to face unemployment, live in poverty, and receive government assistance.

It is possible that the primary drivers of these changes were short-lived and fueled predominantly by the pandemic (sick family, household job losses, remote learning difficulties, etc.). Still, the personal and societal effects of this cohort’s struggles and lost learning will likely be felt for years to come.

NJ Community Colleges Acknowledge the Heroes in Our State