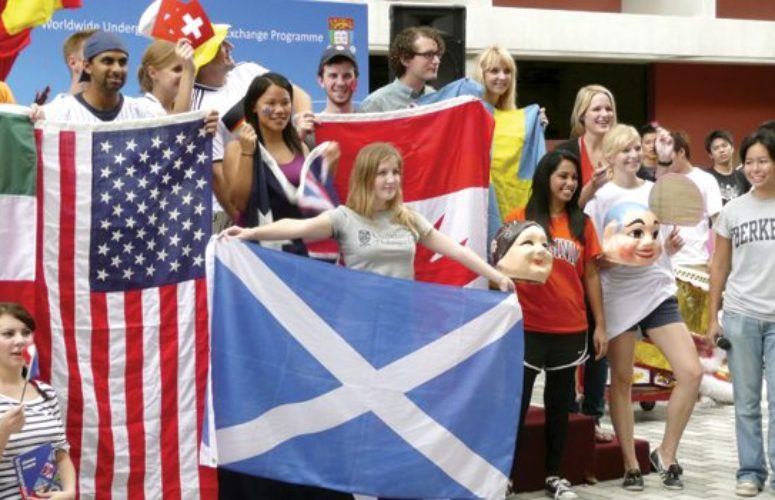 What international endeavors are New Jersey institutions of higher education exploring and what makes them vital in today’s global economy?

Colleges and universities in New Jersey are not only among the best in the United States, but are among the best in the world. Not only do New Jersey learning institutions provide quality education to students in the state and throughout the country, but through international satellite campuses and study abroad and exchange programs, they are providing their students, as well as international students, that same quality education in almost any country one can imagine.

“Education by nature has gone global,” says Dr. Dawood Farahi, president of Kean University. “In order for colleges and universities to succeed and prosper, they need to capitalize on the globalization of education and bring the same experiences and quality of education we have here in New Jersey, to other countries, while at the same time giving their own students the opportunity to study internationally.”

“International learning broadens the whole education experience,” adds Joyce Strawser, dean of Seton Hall University’s Stillman School of Business. “Teaching students how to be leaders of international companies and to understand how to operate on a global basis is important, no matter where they come from. To talk about it as a concept is one thing, but when you are physically interacting with people from other countries and understanding the different ways that business can be done, and the different cultures, laws and regulatory environments abroad, it is much more compelling.”

For Kean University, Union, understanding the importance of a global education is vital to its mission, Farahi says. The university will be opening a state-of-the-art, full-scale campus on approximately 200 acres of land in Wenzhou, China – one of the country’s fastest growing regions. With a groundbreaking held in 2011, Wenzhou Kean University accepted its first cohort in 2012, held in facilities which were already completed. Today, there are approximately 1,000 Chinese students enrolled in programs such as finance, accounting, computer science and international business management. By 2016, Farahi says more than 5,000 students will be enrolled at Wenzhou Kean University, which will include Kean USA students who will travel to Wenzhou to study for one semester, or a full year.

“Having this partnership in China provides a multitude of amazing advantages,” Farahi says. “One of the biggest is that China, outside of Canada, is the largest trading partner with the US and the largest trading partner with New Jersey, as well. And with the Wenzhou area (one of the most educated provinces in China) and New Jersey (one of the most educated states in the US) both moving towards a knowledge-based economy, it will allow the kind of interaction and business development the likes of which hasn’t been seen before.”

Farahi says that all of the programs and instruction at Wenzhou Kean University are in English and all of the curriculums, as well as the faculty, are from Kean USA.

Seton Hall University, West Orange, also has a presence in China with an “executive-style MBA” in Zhuhai. The program – which has a concentration in management – consists of 42 credits, similar to Seton Hall’s West Orange curriculum. The university initially completed a pilot of the program in Shanghai in 2011. The 16 Chinese students in that pilot cohort made the trip to West Orange for graduation in 2013. Today, there are approximately 70 students committed to the Zhuhai program for the current cohort, Strawser says.

“We offer the same courses and same content that we do in New Jersey, in Zhuhai, with some tweaks,” she continues. “We understand that in China, they are going to want to focus on what is going on there and the ways of doing business there. We also send some of our faculty from West Orange to China to teach classes, as well as hire local Chinese faculty.”

“The world is global and China is a huge player in the global economy,” says Dr. Gregory Prastacos, dean of the Howe School of Technology Management at Stevens Institute of Technology, Hoboken. “So, it is very important for our school to have good relationships with the top schools there.”

Partnering with the Central University of Finance and Economics (CUFE) in Beijing, Stevens offers master’s degree programs in project management and business intelligence and analytics.

Additionally, the school has a multitude of partnerships with other universities around the world, including: the National University of Malaysia; the University College London; and Universiti Brunei Darussalam, to name a few. And, Stevens Provost George Korfiatis says the school is constantly pursuing other partnerships.

“Having a presence across the globe as a university becomes more important and more strategic as the global economy changes,” Korfiatis says. “Being able to work together with entities around the world is important to bridge the societal gap and solve problems.”

Study abroad and student exchange programs provide an excellent way for colleges and universities to send students to other countries, while bringing in international students to campuses in New Jersey.

“We have one of the most diverse states in the country,” says Ben Levy, director of international education at Ramapo University, Mahwah. “New Jersey has a lot of the top major companies in the country, along with many US company headquarters. The state also has plenty of international companies, as well. So, being able to interact in effective ways and communicate with people of other cultures is extremely important here.”

Ramapo currently has approximately 500 individual international program options in more than 65 countries. “There are options available for every single major that we have here,” Levy says.

As an example of one of the programs that Ramapo offers, students majoring in sociology, international studies and environmental studies majors can take the Ramapo College South India Semester Program based at the Fireflies Intercultural Centres, near Bangalore. The program includes 16 credits from Ramapo, round trip airfare, accommodations and most meals.

“The trend right now in higher education is to have a strong internationalization plan,” Levy says. “And here at Ramapo, we try to infuse this idea of ‘going international’ in everything we do.”

William Paterson University, Wayne, has multiple memorandums of understanding and international agreements with schools around the world that include: Zhejiang University in China; Jindal Global University in India; Artevelde University College in Ghent, Belgium; and Windesheim University in Zwolle, Netherlands.

“Our college of education has been working with Windesheim University and Artevelde University College in a cross-cultural study of school-based teacher education programs,” says Dr. Warren Sandmann, provost and senior vice president of academic affairs at William Paterson University. “We have a student and faculty exchange with these schools. So when one of our students, for example, goes over to one of these schools, they continue to pay tuition at William Paterson and they do not have to worry about whether the courses they take count towards graduation. And also, faculty from these schools will come here to William Paterson and sit in on our education courses to see what we are doing so that they can see what we are teaching here in the US.

“For our students, we want to give as many of them as possible a truly global education,” Sandmann continues. “We want to make sure that they are able to understand how the world works, which is why we have these international partnerships.”

“Studying abroad creates a great deal of independence within a student,” he says. “It fosters an ability to handle ambiguity and the ability to appreciate other cultures in order to understand how to work and navigate within a diverse work culture. These experiences really make students stand out to employers.”

Centenary College in Hackettstown has multiple partnerships for study abroad and exchange experiences with institutions in Canada, China, England, Italy, Japan, Northern Ireland and South Korea. Dr. Joseph Linksey, dean of the school of international programs at Centenary College, says that students can travel abroad to take courses for credit with any degree Centenary offers.

Linksey adds that bringing international students to Centenary’s Hackettstown campus via the exchange programs is vital because it “internationalizes and diversifies the student population,” which is valuable for the school’s students who may not have an opportunity to travel abroad.

“The world is so small today, which is why it is so important to give all students, no matter where they come from, a chance to experience everything it has to offer,” he concludes. “There was a time – especially in the US – when you became educated here and you could graduate and get a good job without worrying about what was going on in the world. But international relations, as far as how the world operates today, is a major part of every business and every industry, especially here in New Jersey.”