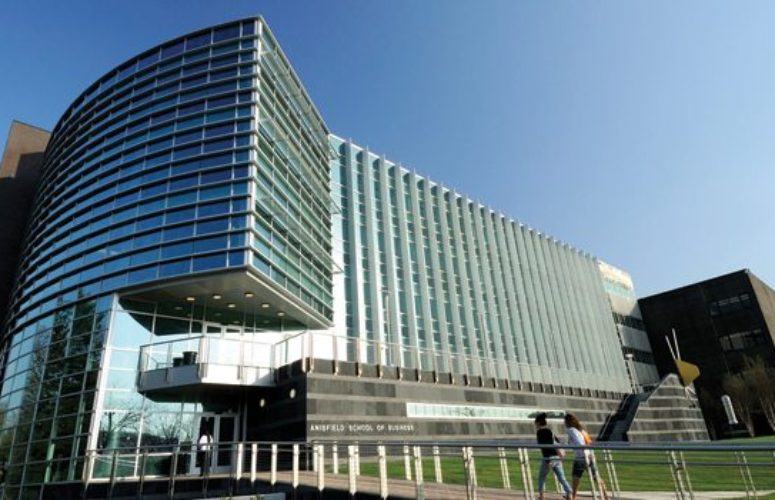 Ramapo College’s Anisfield School of Business opened in 2007, and is named for Richard and Millicent Anisfield.

Members of the state’s higher education community have no shortage of appreciation for the value of a prominent name when it is attached to a campus facility and comes with a financial stake that enables a school to invest in programs, scholarships and new classrooms. A good name also brings a degree of prestige and reassurance that helps to leverage more donations from other philanthropists, they say.

“There’s a signal when an alum or even an organization supports a school,” Joyce Strawser, dean of the W. Paul Stillman School of Business at Seton Hall University, says. “You’re telling people this is a school or a department that somebody believes is valuable enough to put their name on.”

Representatives of business schools and institutions from around the state recently spoke with New Jersey Business about the value of naming rights and recent developments that are making their educational programs better able to serve the evolving needs of today’s students.

The John J. Heldrich Center for Workforce Development at Rutgers University bears the name of a former Johnson & Johnson executive whose leadership helped to transform an ailing New Brunswick into a vastly more attractive, bustling city. Heldrich, who chaired New Brunswick Tomorrow, passed away in October, but the Heldrich Center continues as an influential resource on workforce projects across the country, center Director and Distinguished Professor Carl Van Horn says.

The Heldrich Center does not have faculty or students, though Rutgers graduate students gain real-world experience there by working on large-scale labor projects, one of which was to help workers displaced by 9/11 find new employment. The Heldrich Center does not operate workforce programs; it helps with research and planning. State and federal grants do not cover 100 percent of the cost of running the center, Van Horn says, which is why Heldrich’s financial involvement was important.

“It’s working capital for us. We need that money in order to write proposals, in order to advance the center – things that grants don’t necessarily pay for,” Van Horn says. The Heldrich Center now employs 30 Ph.Ds and is at work on a “big data” project to gauge the effectiveness of New Jersey’s workforce development programs.

Ramapo College of Mahwah, also a public institution, named the Anisfield School of Business after receiving a $2.5-million gift from the former CEO of the Kurt Versen Co. and his wife, Richard and Millicent Anisfield. The family has since given the business school another $500,000, and the school occupies a gleaming new building that opened in 2007 and includes a state-of-the art financial trading lab that opened in 2010.

The school is now accredited by the Association to Advance Collegiate Schools of Business – AACSB International, a form of recognition that serves as a badge of quality.

“That never would have happened without the naming gift,” Chakrin says, “You have to have faculty of a certain caliber, and that came with the gift.”

The school has recently added a Career Services Office to help students enter the workforce with appropriate job search, resume development and interviewing skills. The school has added a project management certificate program, and it has created a 20-month accelerated MBA program for working professionals.

Similar to how things worked for Ramapo, support from oil industry titan Leon Hess helped Monmouth University to secure AACSB accreditation for the Leon Hess School of Business, school Dean Donald Moliver says. “When they say, ‘What are your resources like?’ I’m able to say there’s a sizeable gift from the Hess Family Foundation. That sends out a powerful signal that we’re able to do things that other places wouldn’t be able to do.”

Like Ramapo, Monmouth used the gift to create a financial trading lab, which opened in 2013. Students use Bloomberg terminals and have preformed exceedingly well on financial literacy tests that Bloomberg administers to its own traders. “It’s not just fizzle and pop, it’s the real deal,” Moliver says.

The Hess money has also enabled the school to give out business scholarships, bolstering enrollment.

Meanwhile, other philanthropists have taken up the banner. The Hess school, which was named in 2009, is on an expansion track, with the 20,000 square foot Steven Pozycki Hall set to open in June. Pozycki is an alumnus of the school and the founder of SJP Properties. His contributions are helping with the construction of Pozycki Hall and he also contributed to the Kislak Real Estate Institute, another division of the Hess School.

Stillman School of Business at Seton Hall in South Orange is named after a man who dropped out of high school, only to rise to great prominence on the New Jersey banking and insurance scene and engineered a reversal of fortune for the Newark commercial district by halting a corporate exodus during the 1950s. W. Paul Stillman also served as a US Treasury bank examiner, and his legacy is additionally valuable for the high personal standards he lived by, Strawser says.

“The message we convey to students is that this is the model to which you should aspire in your business career,” she says, noting that Seton Hall likes to instill a respect for ethical leadership among its students.

The Stillman School will soon be augmented by the Gerald P. Buccino Center for Leadership Development. Buccino, a member of the Class of ’63, is a gifted business turnaround specialist. His $1-million gift toward the center was announced in May.

In the works at Stillman is a data analytics program that will enable students from all business majors to manage the vast amounts of data that modern computing and social networks now create.

“What we’d like to do is establish competency in data analytics,” Strawser continues, “which means that no matter what major you might choose – management, accounting, marketing, finance – within your course of study you would also develop the ability to look at data, to make conclusions from it, to appropriately report on that – to deal with the new era that we’re in where data is everywhere.”

The Russ Berrie Institute (RBI) for Professional Sales at William Paterson University in Wayne got its name from a world-class salesman who started out delivering newspapers in the East Bronx and realized in 1963 that his future was in supplying businesses with impulse gifts. He began his venture in a garage with $500 and closed his first year with over $60,000 in sales, which in today’s dollars would be nearly half a million.

In 2003, a year after Berrie’s death, the sales institute was founded in his name, thereby giving true dignity to the scientific method that embodies the art of sales, according to Siamack Shojai, dean of the Cotsakos College of Business at Paterson. “Professional sales traditionally has not received the prestige and recognition that it really deserves,” he says.

The school is trying to do as much as possible with the Berrie name and his financial legacy. “We are very ambitious,” Shojai says. “Our goal is to become the No. 1 industry-related college of business in New Jersey and beyond.”

From a new global financial training center to summer boot camps for sales trainees to an international sales contest held each year at RBI, the school has managed to leverage gifts from donors into very tangible gains, Shojai says. A November 2014 sales event attracted students from 40 different schools and strong corporate participation. The corporations get exposure to very promising sales students and the school gets corporate sponsorship gifts that enable it to do even more, Shojai says.

“In these tough economic times, when the cost of education is rising, we really need to rely on the partnership of corporate America,” he says.

It was paid for mostly with state funds, but for the right amount of money, somebody could still get their name on the front, says Pamela Fergueson, vice president for institutional advancement. “Naming for the new academic building at William Paterson, because it’s so large and so prominent, is a $10-million opportunity,” she says.

State support for the operations budget at Montclair State University has declined to around 20 percent today from around 80 percent within two decades, John “Jack” Shannon, vice president for university advancement, says. That makes it imperative to go after other funding. Such kickoff gifts as the $400,000 power company PSEG provided to fund The PSEG Institute for Sustainable Studies make a difference, Shannon says. This summer PSEG pledged an additional $1 million to the institute.

The institute doesn’t have faculty or classes, but through the projects it undertakes – for example, a $200,000 study of toxic sediment in the Passaic River – participating students are exposed to meaningful learning experiences, and that’s what donors are looking for, Shannon says.

The school is hoping to attract donors for the new 107,500-square-foot Center for Environmental and Life Sciences, which is set to open in the fall of 2015. “We do not have the building yet named, but we are cautiously optimistic that we will have those naming opportunities funded by the time we are open, and we are also using development of this building to bring in additional donor support for student scholarships as well as for programmatic research opportunities by the faculty, who will occupy the building,” Shannon says.

William G. Rohrer’s interest in Rowan University brought the school a $10-million gift that established the William G. Rohrer College of Business. The South Jersey businessman was a humanitarian with an interest in the educational and economic prosperity of southern New Jersey.

With the aid of state bond money, Rohrer College is expanding. The $63-million project will create a 114,000-square-foot building that will be up and running by the spring of 2017, Associate Vice President for University Advancement RJ Tallarida says. It will be a showpiece on campus, and, he adds, “We’re looking for this to be the epicenter for business excellence in New Jersey. We’ll be holding a whole variety of business courses there. There will be space for outside business leaders from South Jersey to come and hold conferences.”

NJCU Is a Top Producer of U.S. Fulbright Students