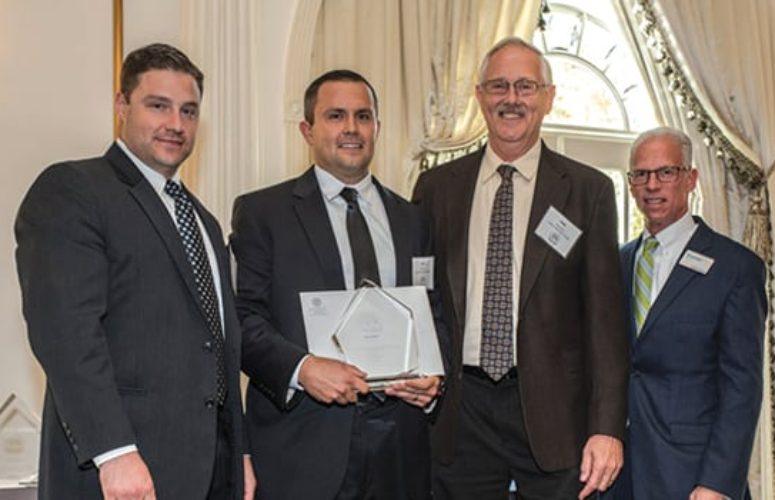 Members of the Sacco family, who operate Chatham Moving and Storage, which traces its roots to the early part of the 20th century.

Businesses with Annual Sales/Revenues up to $10 million

Fifteen multi-generational family businesses were honored recently by the Rothman Institute of Innovation and Entrepreneurship at Fairleigh Dickinson University during the institution’s 25th annual New Jersey Family Business Awards. The event, held at the Crystal Plaza in Livingston, recognized the significant contributions to the economy and community made by those businesses and families.

Master of Ceremonies Sally Glick, principal and chief growth strategist at Sobel & Co., told the audience, “FDU has been at the forefront, since 1992, in putting the spotlight on the state’s family business community, recognizing the significant impact that family businesses have had on New Jersey’s economic landscape.

“While a family business starts with the vision of an entrepreneur, it is sustained through the decades by each generation making [its] own critical contribution to the family’s future success.”

Glick said that family-owned businesses have a commitment to community, contribute to charitable organizations, encourage and engage their employees, focus on long-term strategies, invest in their dreams and hold fast to their core values.

The history of Chatham Moving and Storage goes back to shortly after World War I, when Eugene P. Sacco bought his first truck to haul limestone block from the ports of Harrison and Newark to New York City, where it was used for construction. In 1924, a Packard Van was purchased and the company began concentrating on household and industrial moving. Chatham Moving purchased Madison Express, a company with roots going back to 1905, when Eugene’s son, Eugene P. Sacco Jr. (Buddy) joined the business. The company worked out of its Madison location until the late 1990s/early 2000s when it began constructing self-storage facilities. Today, Chatham Moving and Storage operates state-of-the-art climate-controlled, self-storage facilities in Chatham and Florham Park, and 60 percent of its business today is on the storage side. Fourth generation family members Jon Sacco and Tyler Stehlgens plan to carry the business onward. In total, of the company’s 18 employees, seven are family members.

Morristown-based McRae Capital Management was founded in 1981 by Rod McRae to fulfill his dream of creating a small firm specializing in personal service. After 36 years, this standard is still at the core of McRae Capital Management. Rod’s son, Roddy, joined the firm in 1996 with a strong background in institutional investing, followed in 2004 by Rod’s other son, Peter, who brought strong research skills from his experience as an equity analyst. The ownership of the company passed to the second generation more than seven years ago, though Rod is still an integral part of the firm. The McRae brothers are focused on keeping themselves relevant in an ever-changing industry in the areas of technology, client communication and marketing. Financial services the firm specializes in include: investment management; retirement planning; estate planning and inheritance; divorce; college planning; trusts; private foundations; gifting; and general budgeting.

Woodbury-based Bellia Enterprises was founded in 1973 by Salvatore Bellia. As a printer in the army during World War II, Salvatore decided to make printing his trade. For 25 years, he worked at a union printing company in North East Philadelphia. When the partners bought him out, Bellia had the opportunity to buy his own printing company, which today is known as Bellia Printing and Design Company. While the company initially focused on printing, Anthony Bellia Sr. and Tom Bellia, Salvatore’s sons, noticed that customers were asking them about where they could locate office furniture. This led to the creation of Bellia Workspace Professionals and the establishment of Bellia Enterprises. Today, the company has 33 employees, nine of whom are family members, with the third generation currently in charge and guiding the company to greater success. Additionally, the company is actively involved in supporting various community nonprofit organizations.

Based in Ridgewood, Intac Actuarial Service, Inc. was founded by Max Rosenberg in 1977. He initially provided one-on-one actuarial and pension consulting to small firms. His brother Harry soon joined the firm and continued to build on the business. In 1994, Max’s son Charles joined the company and today is vice president and managing partner. For more than 40 years, the professionals of Intac have been helping business owners achieve greater tax benefits and retirement savings. Today, they provide complete retirement plan administration for more than 2,800 small and mid-sized companies, their owners, key executives and employees. The firm employs 52 people, of which five are family members. The company’s team of plan consultants customizes and monitors all plans to ensure provisions continue to meet client retirement and tax savings goals, while remaining compliant with ever-changing tax rules and regulations.

Jarmel Kizel Architects & Engineers, based in Livingston, originally concentrated on the interior design of corporate offices since the firm’s founding in 1975 by Marvin Jarmel, PE. With the addition of Marvin’s sons, Richard (architect) and Matthew (engineer), and Irwin Kizel (architect) in the early 1990s, the firm has grown into a full-service, architectural and engineering and interior design firm that provides single point of accountability for all aspects of design services. With in-house civil, structural, mechanical, electrical, plumbing and fire protection engineering, clients can look to Jarmel Kizel to have all aspects of their projects designed and managed by one firm. Its portfolio includes projects in the following areas: office building and interiors; restaurants and retail; multifamily and dorms; medical, fitness and wellness, education and child development; and industrial and manufacturing. The Livingston-based firm currently employs 50, including four family members. From oldest to youngest, they include Marvin Jarmel, Richard Jarmel, Matthew Jarmel and Deborah Jarmel.

Key Properties, while formally founded in 1983, maintains roots dating back to 1952 when Abraham Schlussel launched his construction business and, subsequently, expanded into real estate investment. His sons, Marc and David, joined the Teaneck-based company in the mid-1980s, and they continue to guide and expand the company’s portfolio today. David’s son, Jonathan, joined Key Properties in 2017, marking a third generation of family leadership. As a development, construction and management firm, Key Properties invests in a range of commercial property types concentrated in Northern and Central New Jersey and is a leading expert in Brownfields redevelopment and condemnation proceedings. Its portfolio today includes approximately 500,000 square feet of assets and more than 30 acres of developable land. The company’s vision and leadership in working in conjunction with municipalities, state agencies, contractors, engineers, architects and brokers has led to the successful transformation of dozens of underutilized properties into valuable real estate assets.