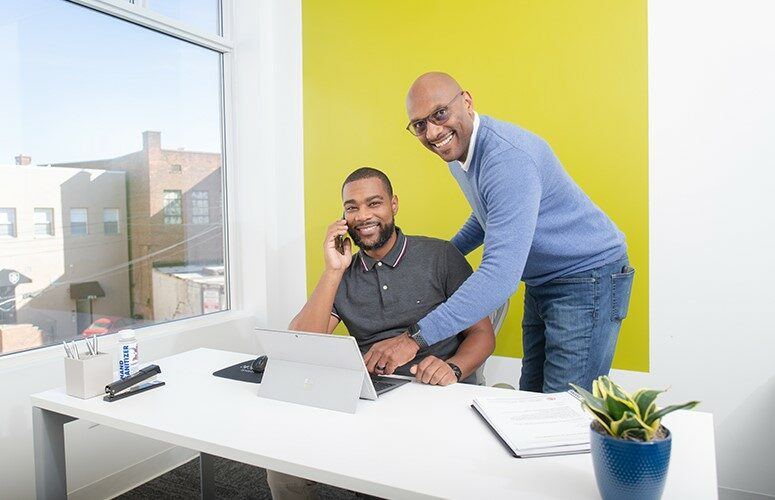 Josh (left) and Earl Cone, Jr., father and son partners of Upscale Medical Transportation in Bloomfield, have observed growth for Black-owned businesses. According to Earl, “The social justice movement was a wake-up call to corporations and businesses, who began to understand what African-American entrepreneurs have experienced.
General Business

August is a time to acknowledge, celebrate and support Black-owned businesses in the United States.

The history of Black-owned businesses in the United States harkens back to the 1700s, when free – and even enslaved – African Americans opened small businesses, which then grew significantly after emancipation. The period between 1900-1930 was known as the ‘golden age’ when the growth of Black-owned businesses doubled. Today, those numbers have risen to approximately 3.12 million, generating $206 billion in revenue.

However, those figures only represent 2.4% of the nation’s businesses, while white-owned businesses account for 86.5%, even though Blacks represent 12.8% of the population. According to John Harmon, Sr., founder, CEO and president of the African American Chamber of Commerce of New Jersey (AACCNJ), 16% of small businesses in New Jersey are Black-owned (80,000) in a state where 1.19 million African Americans reside.

“There are several reasons why there is such a disparity and systemic challenges, such as the absence of capital, funding opportunities, being a first-generation entrepreneur – and more importantly – the public sector’s lack of policy and commitment to diversity,” Harmon remarks.

New Jersey has been slow to establish diversity goals, particularly in ensuring that money is available for public contracts, unlike New York, which currently has a set aside of $3.2 billion.

According to Harmon, the COVID-19 pandemic decimated many Black-owned businesses in New Jersey. Over 41% did not re-open due to state mandates, health issues, and a lack of capital, in spite of the stimulus programs.

The social justice movement, and the death of George Floyd, abruptly created an awareness of the disparities that exist. Corporations, non-profits, mid-sized businesses, and banks reached out to the Chamber, asking how it could help bridge the gap and open more opportunities for Black-owned businesses.

Josh and Earl Cone, Jr., father and son partners of Upscale Medical Transportation in Bloomfield, have observed growth for Black-owned businesses. Josh established the company in 2013 after working in the medical transport industry, believing he could offer improved services and a better experience for patients and the medical community.

It was a struggle in the early years, and it became even more difficult when his original partner decided to leave. Lacking a network, financial backing, and a support system, he considered closing the business. Earl, whose background was in financial services, moved from North Carolina to assist, providing the necessary reinforcement his son needed.

“Just as the business was beginning to grow, the pandemic came along, taking things a step back,” comments Josh. “Once again, I thought the business would fold, but the Paycheck Protection Program (PPP) loans and stimulus helped to sustain us through a difficult time.”

According to Earl, “The social justice movement was a wake-up call to corporations and businesses, who began to understand what African-American entrepreneurs have experienced. The private sector has embarked on developing programs to ensure more diversity, equity and inclusion in their contracts and request for proposals (RFPs).”

While positive change has been encouraging, such as access to Small Business Administration (SBA) loans and grants, a lack of available funding continues to be the greatest hindrance. Obtaining capital and loans from larger banks remains a difficult process, and contracts from the public sector and hospital systems remain elusive as well.

Notwithstanding these obstacles, Upscale Medical Transport has sustained and nurtured its business. Today, the staff totals 12. Employees are afforded an opportunity for growth through job training and the ability to achieve medical operator certifications.

“The future looks brighter for the advancement of Black-owned businesses, and opportunities exist,” Josh comments. “However, many Blacks are afraid of stepping into entrepreneurship, fearful of the scarcity of funding and contracts. The need for a stronger support system continues to be a primary issue.”

Erica Lasan is the founder and CEO of Joyrney to Purpose, a motivational program that supports entrepreneurial women and overwhelmed mothers rediscover themselves. Lasan develops creative solutions and systems to help clients find joy, healing and purpose in their personal and professional lives.

Her personal journey into entrepreneurship spans almost two decades, but was cemented in 2020 after the onset of the pandemic. She had recently accepted a position in marketing, then shortly thereafter discovered she was expecting her first child. At the same time, her job was abruptly eliminated, leaving her confronted with decisions on the direction of her professional and personal life.

Entrepreneurship began somewhat by accident, with the creation of a blog on career and motherhood. That led to a podcast, and later, the development of training workshops. Lasan’s organization has experienced significant growth in the past two years, and she acknowledges that much of it was related to COVID and isolation, as many people began to question what was meaningful in their personal and professional lives. Joyrney to Purpose became a support network.

“Obtaining large contracts and funding are not a challenge for me at this time, but challenges exist nonetheless,” Lasan comments. “Not having a support network or business mentor, particularly when starting out, was one of the greatest barriers I faced.”

Lasan has observed that many women desire to become entrepreneurs and often struggle with the psychological side of starting a business. Self-confidence, self-worth, and fear of failure commonly show up in her client group conversations.

“Support groups for women, and particularly women of color, are critical, especially when launching a business,” Lasan notes. “My goal is to build a business and a legacy for others to benefit from, helping them to find the avenues that can lead to success, prosperity, job satisfaction, and personal growth.”

“The future looks bright for Black-owned businesses, yet more work is needed in order to create greater equity and less disparity,” Harmon comments. “We are a resilient group of people – we have survived 1619 [the first time African slaves arrived in North America in a British ship], Jim Crow, segregation, and the death of George Floyd. I have no doubt we will continue to navigate the obstacles and move forward with determination and perseverance.”