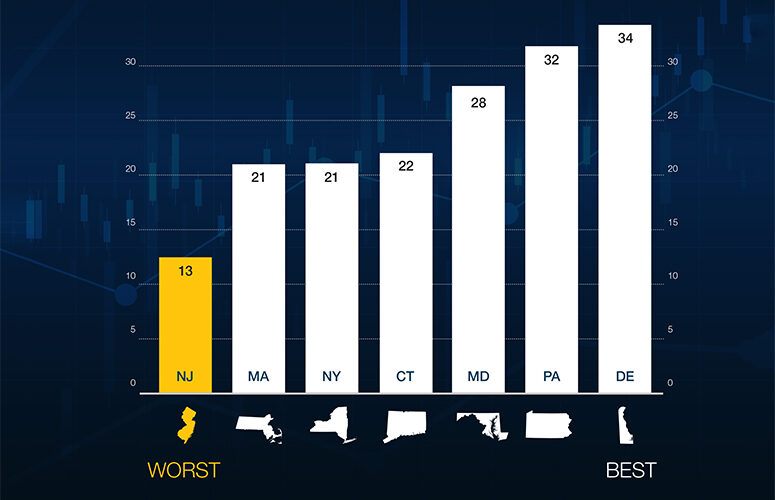 Some advocates miss the boat on affordability. Every state can be viewed as affordable for a wealthy family or a successful business, and every state can be perceived as unaffordable for very low-income people or small business startups struggling to make a profit. What matters more is a state’s competitiveness for the vast majority in the middle of that wide economic spectrum.

Our gut tells us New Jersey is less competitive in terms of our affordability, but new research from NJBIA clearly demonstrates that. Not surprisingly, the 2022 Regional Business Climate study, which was just published, ranks New Jersey last among our neighbors – behind Delaware, Pennsylvania, Maryland, Connecticut, New York and Massachusetts.

The analysis examined six cost drivers: minimum wage, income taxes, corporate taxes, property taxes, sales tax and unemployment insurance. Interestingly, each of the seven states, except for New Jersey and Massachusetts, ranked most competitive, boasting the lowest tax rate in at least one of those categories. New Jersey is an outlier with both the highest corporate tax rate and property tax burden in the region; both taxes are more than 10% above the state in our region with the second-highest tax in those categories.

As policymakers grapple with the state budget over the next several months, it is critical that they understand New Jersey’s lack of affordability and act on that in the FY23 spending plan. The budget could easily touch on three of the Regional Business Climate cost drivers: corporate taxes, unemployment taxes and property taxes.

The Senate has passed a $330 million property tax relief bill, and we hope it is eventually reflected in the governor’s proposed budget so those property tax savings can be realized. The current corporate tax surcharge is set to sunset next year, so budget decisions should be made today to allow that highest-in-the-nation rate to go down.

Our unemployment insurance payroll taxes are in the process of going up by about a billion dollars, potentially making us worse in that tax category. The New Jersey budget process could be used to allocate federal funds for unemployment insurance as most states have done to prevent payroll tax hikes. For example, Pennsylvania has the second-highest corporate tax rate, but Gov. Tom Wolf’s recent budget proposal included a massive corporate tax cut.

New Jersey is at the back of the pack in terms of affordability and cannot let the opportunity of a $48.9 billion state budget go by without providing tax relief.