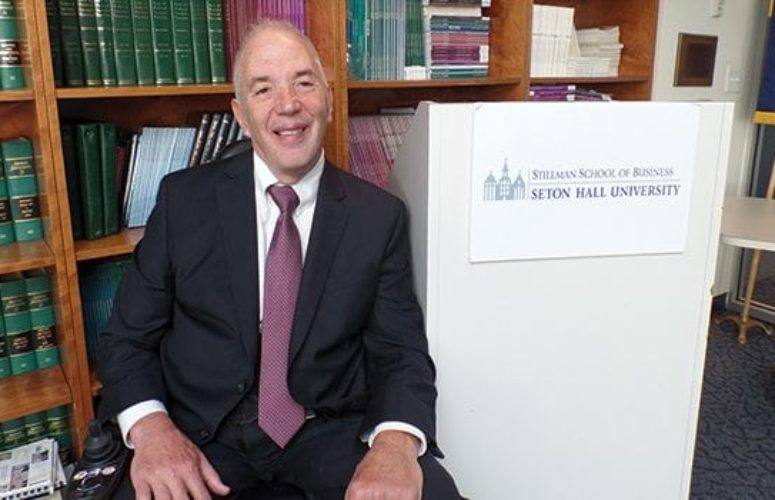 “I will never let my disability define me. I am not the guy in the wheelchair. I am an entrepreneur, professor, author, columnist, husband and father,” says Bruce Freeman who, among other things, is president of Proline Communications and now has entered the realm of motivational speaking.

Suffering from progressive multiple sclerosis (MS), Freeman is starting to talk to various groups and organizations on the topic of turning adversity into opportunity. It is his personal story that others can relate to and be inspired by.

Taking time for an interview while teaching a behavioral management class at Seton Hall University’s Stillman School of Business in South Orange, Freeman tells New Jersey Business about an epiphany he had while returning to his hospital room after a physical therapy session many years ago: “The nurse rolled me back to my room and was helping me back into bed when my cellphone rang. I answered it with one leg in bed and the other hanging in the air. On the other end of the line was a marketing director of a computer company out on the West Coast. To make a long story short, I closed an $180,000 deal. At that moment I realized I didn’t need my legs to conduct my business. I just needed my brains, experience, reputation and education. … That is how I’ve gotten through this,” he says.

Freeman’s message is that everyone has adversity in their lives. “Ninety-nine percent of us do,” he says. “You just have to work around it. You can view it as a problem, a challenge or an opportunity. In my case, I made my MS an opportunity.”

Freeman began experiencing MS symptoms in 2001 at age 50. However, he wasn’t fully diagnosed until age 57 after a severe MS exacerbation. “I came home from the synagogue, got to my bedroom and collapsed. I could not walk,” he recalls.

According to the National Multiple Sclerosis Society, MS is as “an unpredictable, often disabling disease of the central nervous system that disrupts the flow of information within the brain, and between the brain and body. The body attacks the protective covering around the nerve fibers, disrupting communication between the brain and body, potentially causing permanent nerve damage and disability.

What is amazing about Freeman is his need to persevere despite his MS. At the time of his early episodes, he and his wife Joyce were raising two daughters who, eventually, the couple would have to put through college. That realization led Freeman to search out multiple means of earning a living.

“My grandmother had an expression: ‘With one tuchus, you can’t dance at two weddings.’ Well, I’ve been dancing at about five,” he laughs. “Sometimes, that’s the better path to follow.”

Freeman has already spoken to various organizations, and says his message applies to most audiences. He adds that he has been successful with special education groups, teachers and parents. A sample of his speech can be accessed on YouTube under the title: “Turning Adversity into Opportunity” – Bruce Freeman. He also can be reached via his website: brucefreemanspeaks.com.