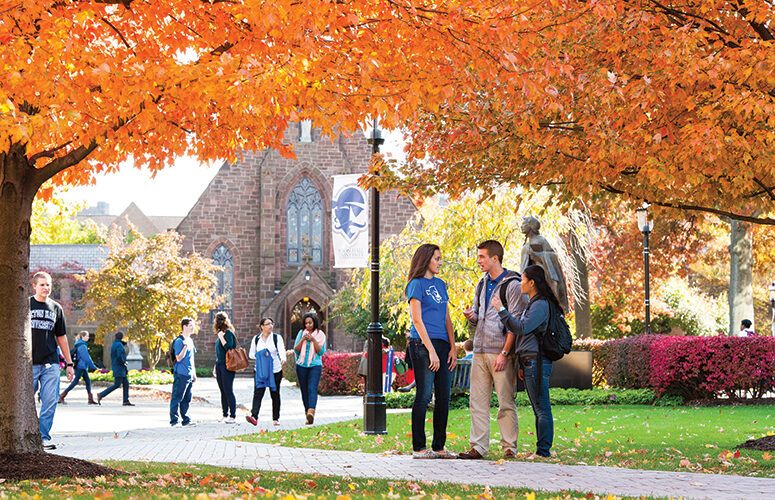 Some Seton Hall University students from out-of-state locales want to be close to New York City, but also have a close community. “We’re proud that we offer the best of both worlds in that regard,” says Seton Hall’s Derek D. Martinez.
Higher Ed

New Jersey has long suffered from a “brain drain” of high school students leaving for out-of-state colleges, but Garden State higher education institutions are partly countering this trend by attracting students from afar.

New Jersey high school graduates may find out-of-state colleges and universities alluring in part because those institutions offer far-away-from-home experiences, and students may be offered discounted tuitions due to interstate competition among higher academic institutions. For these and other reasons, according to the National Center for Education Statistics, New Jersey exported 30,547 college-bound students in 2020, part of a broader trend that has spanned decades, and that multiple entities have sought to reduce because it could adversely impact New Jersey’s future workforce and economy.

However, in addition to trying to keep students in the state, higher education institutions have found that the “brain drain” problem can at least be partially hedged by successfully recruiting out-of-state and international students into New Jersey. The number of inbound students is small – about 5,000 annually out of 32,156 total first-year 2021 New Jersey students (excluding community colleges, independent religious colleges, and non-baccalaureate-degree-offering proprietary independent institutions) – but these inbound students may increase income for New Jersey’s colleges and enrich campus life here via geographic diversity.

“I would [stress] the value of having students from other states and other countries here [in New Jersey],” Christopher Romano, vice president for strategic enrollment, outreach and engagement at Mahwah-based Ramapo College of New Jersey, says, adding that today’s employers seek workers with intercultural communication skills as well as the ability to think critically from multiple perspectives.

“Coming to campus and living with a student from another country or state begins that learning earlier and fosters it outside the classroom as much as it’s occurring inside the classroom,” he says. Higher education experts likewise relate that college students from New Jersey are eager to attend college with classmates who have arrived from other locales.

Why do out-of-state students ultimately choose New Jersey? While there are many reasons, proximity to Manhattan may be a key draw, at least for northern New Jersey. “Students can choose to go to a New York City school if they want to, but we find that many students want a close community – a gated campus with a suburban feel to it,” explains Derek D. Martinez, assistant vice president, marketing and communications, enrollment services at Seton Hall University in South Orange. “We’re proud that we offer the best of both worlds (access to New York and a close community). Students do have the opportunities that they’d find at bigger schools.”

However, although high school students everywhere have heard of Manhattan, at least some Garden State educators report that out-of-state high school students do not necessarily know much about New Jersey. “It’s a challenge in that I do not know if folks outside of New Jersey [are aware of] the wonderful things that New Jersey has to offer, up and down the Turnpike and the Parkway,” Ramapo College’s Romano explains. “I don’t know that it is a resistance [to New Jersey] as much as it’s an unknown.”

Arguably a clearer-cut attraction for students: The quality academics at many of New Jersey’s nearly 30 four-year colleges and universities (the state has more than 80 higher education institutions overall).

In the realm of excellence, Seton Hall University, for example, notes that its graduates’ mid-career earnings are among the top 12% nationally. Additionally, U.S. News & World Report ranks Stevens Institute of Technology as No. 83 overall among all national universities in its 2022 rankings, with Rutgers University-New Brunswick ranked No. 63 among national universities. Many other colleges/universities in the Garden State also have high rankings and/or claims of distinction; Princeton University is ranked No. 1 in the country.

Regardless of their reasons for coming to New Jersey, international representation can vary, with students hailing from more than 100 different countries at one institution alone, with more – and fewer – international students at other specific institutions. Colleges and universities report that China and India remain key originating destinations, although students can potentially arrive from almost any of the world’s 195 countries.

Recruiting from Other US States

On the US front, logistically recruiting students from other states is a monumental task for New Jersey colleges and universities, which includes having dedicated recruiters located in other states, and sending admissions staff on cross-country travels to convince high schoolers to matriculate in the Garden State.

Seton Hall’s Martinez explains, “From an organizational structure standpoint, we strategically placed full-time recruiters to work remotely in regions [of the country]. They can [interact] with students from those regions, build relationships with those high schools, and get students to learn more about Seton Hall University and then ultimately enroll. It’s been successful for us.”

Eck explains, “The key is generating interest. Once you have a student who’s interested in your institution, the goal is then to get them to apply.”

As for international recruiting tactics, colleges and universities may not typically send their admissions staff abroad, but they can make outreach efforts, and New Jersey has had overall success. International recruitment, again, can draw from key locales such as China, India and other parts of Asia, but it can also rely on old-fashioned word of mouth: Ramapo College reports that two students from Nepal returned to their countries of origin spreading rave reviews of the school, and Ramapo recently enrolled 30 to 40 new Nepalese students. A similar phenomenon occurred with Bulgarian students.

But overall recruiting efforts are not always easy for New Jersey colleges, especially on the domestic front. First, a persistent counterforce is the influx of out-of-state college recruiters who target New Jersey’s high schools, where most students have reaped the benefits of one of the nation’s best K-12 educational systems. “[These good students] make New Jersey an extremely desirable state for out-of-state recruiters to come to, and for colleges to want to draw from,” explains Ramapo College’s Romano.

Second, New Jersey college and university recruiters are arguably at a strategic disadvantage. Romano explains, “If I’m an admissions recruiter from California, I can recruit the entire state of New Jersey in two or three days because of [the state’s small] size and density. In those two or three days, I can see a lot of people.

“As we [in New Jersey] travel west to recruit, you’re not seeing that same volume of people in such a short period of time. This means recruitment becomes more expensive because you’re there longer.”

Whether students come from domestic or foreign locales, New Jersey colleges and universities here are working to attract quality students amid a fiercely competitive marketplace: According to a 2022 ECMC Group study, only 51% of US Gen Z teens are interested in obtaining four-year college degrees, and high school populations are declining overall, particularly in the Northeast, creating a smaller prospective-student pool from which colleges can draw.

The bottom line may be that bringing college students into New Jersey can help higher education institutions here, but it isn’t a panacea that completely counteracts New Jersey high school students’ vast outmigration.

NJIT’s Eck concludes, “[Outmigration] is just something that we have been working with and dealing with for many years.

I wish more [New Jersey residents] would … have a true understanding of the greatness of New Jersey’s colleges and universities.”