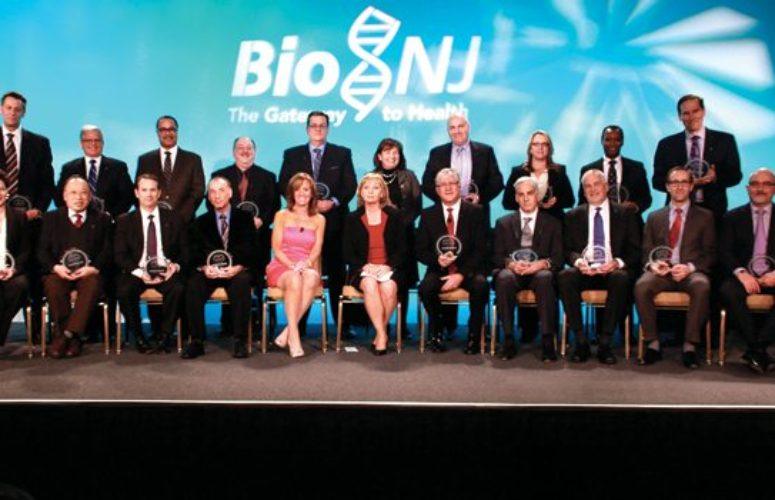 At its 22nd Annual Dinner and Innovation Celebration, BioNJ honored 19 innovator companies with footprints in New Jersey that were responsible for more than 30 approvals granted by the U.S. Food and Drug Administration (FDA) in 2014. The event was held on February 5, at the Hilton East Brunswick.

“As the Gateway to Health, BioNJ is committed to fostering a life science ecosystem in New Jersey where science is supported, companies are created, drugs are developed and patients are paramount,” said Debbie Hart, president of BioNJ. “Our 22nd annual meeting celebrates the advances in medical innovation with ties to New Jersey that are helping patients live better, longer lives while lessening the burden of illness and disease on society.”

Led by Lt. Governor Kim Guadagno, NPS Pharma CEO and President and outgoing BioNJ Board Chairman Francois Nader, M.D. and Hart, the Innovation Awards ceremony saluted innovator companies that played a prominent role in the banner number of new molecular entities and medical devices approved by the FDA since last year’s annual meeting. Of the 41 new molecular entities approved in 2014, 18 – or nearly half – are the result of research and development work done by companies with a footprint in New Jersey. Of the 37 new medical devices approved, 14 – or more than a third – were the result of work done by companies with a similar footprint in the state.

“These impressive drug development successes demonstrate that New Jersey has a thriving community of innovators that continue to deliver life-changing medicines and devices to patients worldwide,” Dr. Nader noted.

Nader stepped down as BioNJ chairman after serving for two years. He is replaced by Stuart W. Peltz, Ph.D., CEO of PTC Therapeutics, South Plainfield.

The 2015 Dr. Sol J. Barer Award for Vision, Innovation and Leadership was presented to BioNJ Founding Chairman, Dr. Abraham Abuchowski, who is the CEO and CSO of Prolong Pharmaceuticals.

Dr. Abuchowski is considered the father of PEGylation, which he spun out of Rutgers University. PEGylation is the most widely used protein drug delivery system in the world and has been used to develop drugs that have helped save and improve thousands of lives, including many with a rare genetic disorder that is commonly known as “Bubble Boy Disease.”

Known affectionately as “The Marathon Man,” keynote speaker Don Wright is a survivor of multiple myeloma. He completed his 85th marathon in 11 years in Vancouver in November 2014. Wright ran his first marathon on June 21, 2003, only to learn shortly thereafter that he had multiple myeloma. He was expected to live no more than three years past his diagnosis. But in March 2008, Wright entered a clinical trial that gave him access to an investigational medication that is now approved in the US. The medication, discovered by New Jersey-based Celgene, controlled Wright’s cancer, and because the medication comes in a pill, it gives him the freedom to run races nationwide.