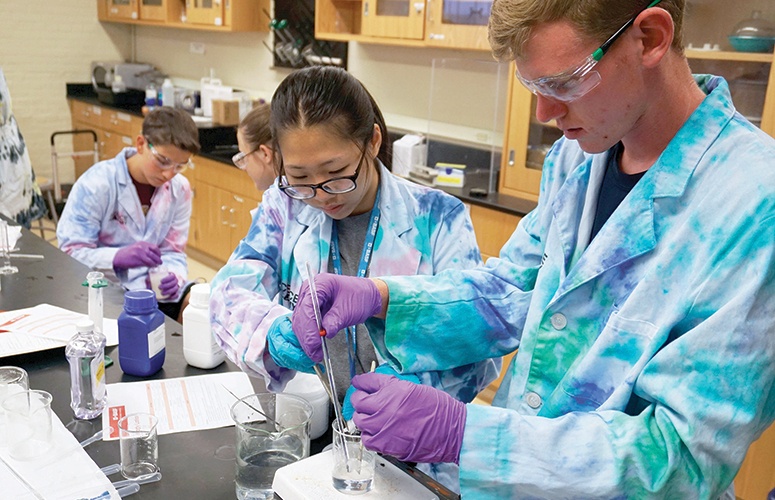 It is a business-world refrain that not enough students are pursuing STEM (science, technology, engineering and mathematics) academic degrees and/or careers, and that various stakeholders ranging from companies and government entities are levering their efforts to ameliorate this. Global giant BASF – with its North American headquarters in Florham Park – is part of this equation, offering a bevy of programs in its “STEM Education in North America” portfolio.

The German-based firm is comprised of six business segments ranging from chemicals and plastics to agricultural products and biotechnology, for example, and Bob Nelson, senior manager in its corporate communications office, says, “We need R&D and chemists just as much as we need the pipefitters and the welders to run our operations safely. And we have to go after all of that talent – that is kind of how our [programs] look at it.”

He adds, “[BASF] sees it in a holistic way: How do we engage students as we start to see the [working] population that has been doing this for years, start retiring?”

Molly Borst, BASF’s manager of STEM education in North America, is an expert on precisely these matters. She speaks at length about BASF programs such as “Tech Lab,” “Science Academy” and “Kids’ Lab,” the latter two which will celebrate their 10th anniversaries in the US next year, and can trace their origins to Germany, where similar programs are almost 20 years old.

Borst describes Kids’ Lab as “a hallmark, cornerstone” program for students aged 4 to 12, adding that since it’s widespread throughout North America, using a one-location “Kids’ Lab” would not have been effective. Instead, BASF began building partnerships with other entities, the first of which was Jersey City-based Liberty Science Center, where – incidentally – Borst had been working as an educator before being hired by BASF. Now, there are more than 100 such location partnerships across North America.

How does Kids’ Lab work? Borst says, “Some of the [hands-on] experiments actually have a take-away; [children] make a product – all of our students get this really great backpack, goggles and aprons. They really become the ‘scientists.’ The hope for starting STEM in North America was just to demystify science, and sparking that curiosity, so that these kids – and their families – would feel more comfortable talking about chemistry and the sciences, at home.”

A different program – “Science Academy” – brings the best and brightest older students from afar for a two-week program at Fairleigh Dickinson University. Yet another program titled “Tech Academy” is for those students who might be more interested in a trade or craft, such as pipefitting or welding.

In broad terms, Nelson reiterates, “How do we as a company, not only through our STEM education, but all those other partnerships that may be led by HR on university relations, attract talent to come to BASF? … It is a multi-faceted approach.”