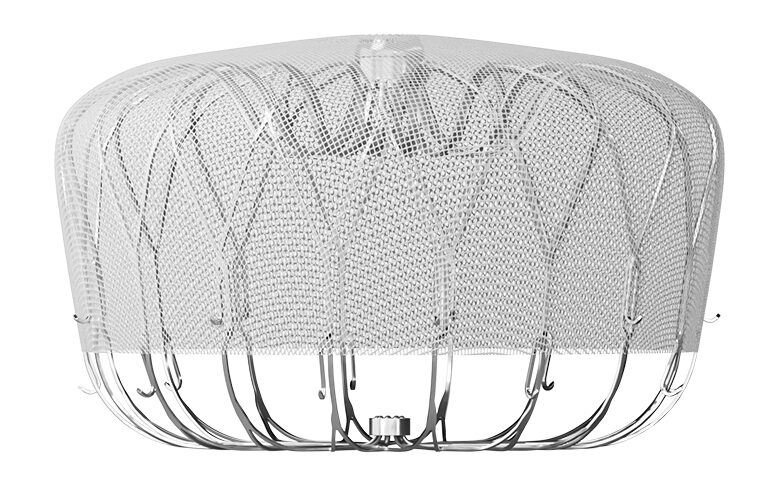 The WATCHMAN device, used at The Valley Hospital, works as a filter to seal off the opening to the left atrial appendage (LAA) of the heart. It prevents blood clots forming in the LAA from breaking off and going to the brain.
High-Tech

At the Forefront of Medical Technology

Medical technology has changed the face of healthcare. From wearable cardiac devices to surgical robots, new technology has helped physicians to reduce morbidity and mortality as well as improve the quality of life for patients.

In 2021, the global surgical robot market was valued at $3.6 billion. According to San Francisco-based Grandview Research, it is expected to expand at an annual growth rate of 19.3% from 2022 to 2030. A shortage of physicians and surgeons and the increasing adoption of automated instruments used for surgeries are among the major factors driving the market.

At Saint Peter’s University Hospital in New Brunswick, the robotic program has been gaining traction over the past decade.

“Our robotic use is in the upper 90-percentile compared to the rest of the country,” says David A. Laskow, MD, chair, department of surgery.

Laskow adds that almost all general surgeons have significant experience using the DaVinci robot that is currently being implemented for liver resection, distal pancreatomy, and robotic splenectomy, and all gastric sleeves for bariatric surgery.

One of the biggest costs for the hospital is length of stay, according to Laskow.

“Because we are able to do these robotic procedures so effectively, and efficiently, the length of stay between an open case (traditional surgery) and robotic surgery is dramatically different. As the length of stay drops, you’ll recoup the costs,” Laskow says.

New technologies are also being utilized at St. Peter’s to help doctors combat sleep apnea and bowel and urinary incontinence.

As an alternative to the traditional CPAP (continuous positive airway pressure therapy) for patients with sleep apnea, doctors at St. Peter’s have deployed an implantable upper airway stimulation device from Inspire Medical Systems, Inc. The device stabilizes a patient’s airway while they are sleeping to prevent obstruction.

According to the Centers for Disease Control and Prevention, lung cancer is the leading cause of cancer death and the second most diagnosed cancer in both men and women in the US.

Traditionally, patients with spots on their lung had to undergo a procedure called needle biopsy whereby a radiologist would stick a needle through the chest wall and into the lung to obtain a tissue sample for biopsy.

Charles Shieh, MD, a thoracic surgeon, and medical director of lung cancer at Inspira Health, says many of the spots are in locations that are not amenable to a needle biopsy.

At Inspira Health, doctors have been using the Monarch Bronchoscopy Platform from Redwood City, California-based Auris Health, Inc., since 2021.

Shieh says that the robotic navigational bronchoscopy allows physicians to get a biopsy from inside out through the airways rather than from outside in through the skin.

“It looks down your airway or windpipe and into smaller airways. The traditional bronchoscopy is not guided, meaning that the doctor does not know where he is in the lung. However, with a navigational bronchoscopy using the Monarch Platform, when you do the procedure, you know exactly where you are in the chest.”

In addition, Shieh says that the technology allows the surgeon to both diagnose and then follow-up with any needed treatment, such as resection (surgical removal).

“You can think of this technology as a one-stop-shop. If the patient comes in with lung cancer, I will be able to diagnose the patient as well as treat the patient,” he says.

Another advantage, Shieh says, is that patients don’t have to go to a huge medical center to benefit from the technology: “They can come to their local hospital here in South Jersey at Inspira, and we are able to perform all these functions that previously only large centers could do.”

Cardiologists at The Valley Hospital in Ridgewood have a new tool in their armamentarium to treat Atrial Fibrillation (Afib), one of the most common cardiac conditions.

“There has been a great interest in identifying high-risk patients with Afib and getting them options for treatment that will reduce their likelihood of stroke,” says Suneet Mittal, MD, director, electrophysiology, associate chief of cardiology medical director, Snyder AF Center, director, cardiac research at The Valley Hospital.

Mittal points out that while blood thinners are commonly used to prevent blood clots from forming in the heart, they can lead to bleeding when used for a long period of time.

He added that one of the biggest reasons why people develop strokes with Afib is that they develop a blood clot in their heart that can break off and go into the brain and lodge there and cause a stroke.

As an alternative to blood thinners for Afib patients who at are high-risk for bleeding, Mittal and his colleagues have turned to the WATCHMAN device from Boston Scientific and the Amplatzer Amulet from Abbott.

“The Watchman and Amulet devices work on the principle essentially of placing a filter to seal off the opening to the left atrial appendage (LAA),” Mittal says. “These devices prevent blood clots forming in the LAA from breaking off and going to the brain and causing a stroke.”

Mittal says studies show that if these devices can be successfully implanted in patients, then the risk of stroke is much lower than what would have been expected had they not been on a blood thinner.

Implantable devices usually involve an upfront cost, compared with blood thinners where there is a daily cost for a long period of time, according to Mittal.

“The greatest cost is the risk of morbidity. If you leave somebody disabled from a stroke, that can cause a lot of direct and indirect cost to our society.”

Mittal says that it is important to educate patients who have Afib that they have options when it comes to treatment.

“Blood thinners will work for the vast majority of patients. For those who have challenges with a blood thinner, they should know that more options are available.”