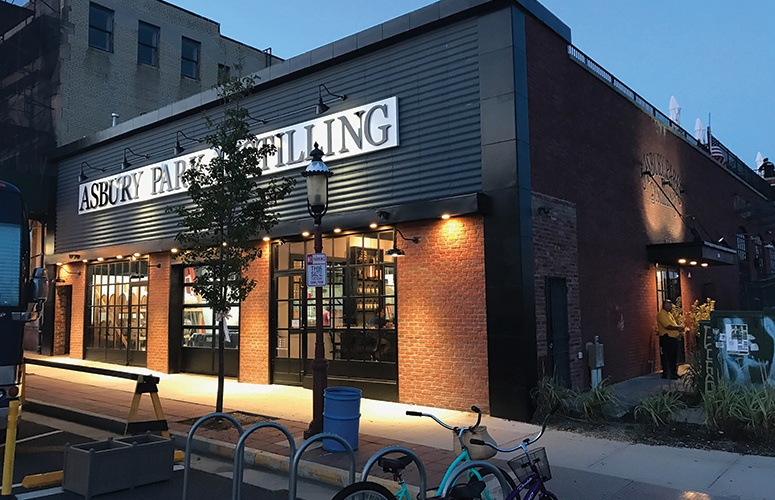 A Toast to New Jersey’s Wine, Beer and Distilling Industries

How wineries, craft breweries, and distilleries are making a significant impact in their local communities – and on the state’s overall economy.

By Jennifer Lesser, Contributing Writer On May 9, 2019

When most people think of the agricultural industry in Garden State, they probably think of fruits and vegetables, but the state is also home to an array of wineries, breweries and distilleries that are making good use of all that New Jersey has to offer. Despite legal burdens and weather-related obstacles, the state’s wineries, craft breweries, and distilleries are producing award-winning beverages, creating employment opportunities, and helping local businesses thrive.

Local winemakers benefit from the ability to grow a wide variety of grapes in New Jersey. Despite sometimes unpredictable weather patterns, there are currently more than 40 varieties growing in the state, from Pinot Noir in the north to Sangiovese in the south. The state’s wines are frequently being recognized with prestigious wine competition awards for quality and flavor.

“The state government has been very supportive of local wineries, and is doing its part to help promote our industry,” says Tom Cosentino, executive director of the Garden State Wine Growers Association. “We’ve been ramping up our efforts to promote our award-winning wines and help local restaurants and businesses thrive as more and more people come to visit our wineries.”

Recent initiatives include a tourism grant that allows wineries to team up with local chefs and restaurants to host dining events showcasing their wines, and in February, a bill was signed that directs the Economic Development Authority to partner with the Department of Agriculture to establish a loan program for certain vineyard and winery capital expenses.

Cosentino notes that there are now approximately 50 wineries that call New Jersey home. “The beauty of our industry is that when someone comes into a tasting room, they get to experience all the state has to offer. When you’re visiting Old York Cellars in Hunterdon County, you’ll have mountains as your backdrop, but then you can go to Villa Milagro Vineyards in Warren County and see the Delaware River,” he says. “People always say they love having the opportunity to sample all of these incredible wines … and that they didn’t realize just how beautiful their state actually is,” he says.

Unfortunately, local breweries haven’t always had an easy time getting off the ground due to an array of state-imposed restrictions on how they could create, serve and promote their craft beers. But in 2012, legislation passed to improve the business environment for New Jersey’s craft brewing industry. Restrictions were loosened on annual production to 10,000 barrels a year (once capped at 3,000) and allowing microbreweries to offer samples of their product both on and off the premises.

At that time, the state was home to a handful of breweries, and according to Alexis Degan, executive director of the New Jersey Brewers Association, more than 100 breweries have now opened their doors in New Jersey. However, there’s still room for growth; she notes that while a 2017 Brewers Association study ranked New Jersey as number 21 in the country for economic impact, the state was lagging behind both Pennsylvania at No. 2 and New York at No. 4. “We’re still a young industry, but we’re starting to see the impact of these breweries at both the state and local levels. So many community businesses have benefited from having a brewery nearby,” she says.

Breweries are also creating jobs throughout the state, particularly in regions that sometimes have a paucity of employment opportunities. “Our area suffers from one of the highest unemployment rates, particularly in the cold weather months, and our brewery provides well-paying, year-round jobs,” says Ryan Krill, co-founder and CEO of Cape May Brewing Company.

Krill adds that the industry is rapidly growing in New Jersey as a result of the nation’s rising interest in consuming independent, craft beer. “There’s really been an explosion in craft breweries across the United States, and we’re starting to see our industry getting more and more competitive,” he adds.

In late 2013, legislation was passed to allow craft distilleries to operate in New Jersey, at which time Asbury Park Distilling became the state’s first craft distillery to locate in a commercial downtown area. “We have hundreds of people walking by on any given day, curious to learn about our process and products, and we couldn’t be happier to give them an insider’s look at this amazing industry,” says Zack Ohebshalom, founding partner of Asbury Park Distilling.

According to Ohebshalom, since the bill passed, nearly 30 craft distilleries have cropped up across the state. “I anticipate many more in the years to come as the industry matures,” he says. “Fortunately, New Jersey has been very welcoming of this industry. I believe regulators recognize the value in embracing this agriculturally-centric business with open arms.”

Best of all, as all three of these industries continue to thrive, they’re bolstering both their local communities as well the state’s economy. “Beyond the employment opportunities, we offer other businesses an opportunity to showcase local products, and we do our best to utilize goods and services of as many New Jersey businesses as possible,” Ohebshalom adds. “The tax revenue generated for the state is immense, and will only increase as we grow our distribution.”

However, that’s not to say that these industries are without their challenges when it comes to doing business in the Garden State. In the brewing industry, there are rules unique to New Jersey that can create hardships for business owners. For example, there’s a requirement for brewery visitors to take a tour before they’re allowed to sample beer. “The restriction is pretty amorphous, and some of these breweries are so small that it’s really just not feasible,” asserts Marshall T. Kizner, shareholder at the law firm of Stark & Stark, which has a beer and spirits practice. “On a busy Friday or Saturday night, how do you drop everything so you can take someone into the back – where everyone is working – before they can be served?” He notes that there is legislation currently pending that could potentially eliminate this requirement.

Unlike Pennsylvania and New York, New Jersey breweries are also not permitted to sell food or carry other made-in-state products. “Because of this restriction, many of our clients have to consider going across the rivers (Delaware and Hudson) … because why would they want to limit themselves?” Kizner says. He notes that among the wine industry’s biggest challenges is having access to enough acreage to procure a license, but they do not have restrictions on serving food, hosting events, or even forging partnerships with local restaurants to carry bottles of their wine for sale.

“Our breweries are getting creative and overcoming these types of challenges by finding new ways to engage with customers in an interesting and educational way,” Degan adds.

In the distilling industry, a restriction on annual gallons produced (20,000 gallons) also hinders growth. “Relative to our neighbors in New York and Pennsylvania with more mature distilling industries, it’s low,” Ohebshalom says. “We hope that legislative leaders will recognize the importance of raising this limit and give us the opportunity to compete on the national level.”

Coping With Pandemic-Induced Substance Use